Tale of the tape could decide double murder trial 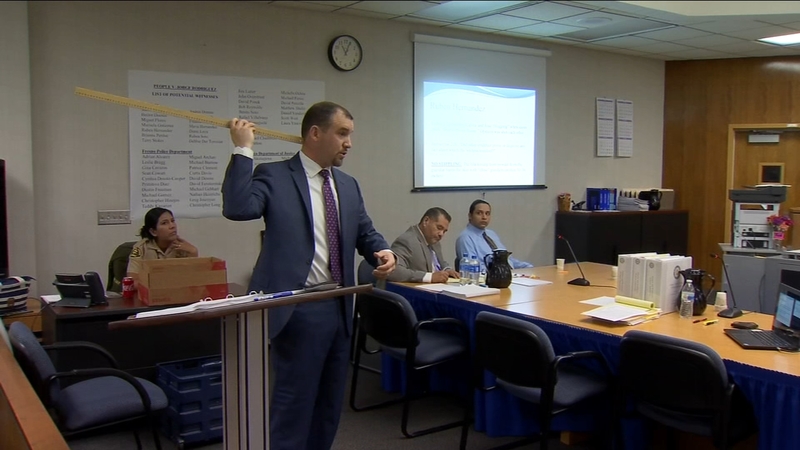 Tale of the tape could decide double murder trial

FRESNO, Calif. (KFSN) -- A tale of the tape could be the telling evidence in the murder trial against a man accused of planning robberies but killing two people in the process.

Jorge Rodriguez has already watched a friend get convicted of murder while his case ended in a mistrial earlier this year. This time around, he's the only defendant on trial and prosecutors want jurors to focus on which of the suspects was skinnier.

When a gunman killed Calvin Reese four years ago, the noise drew several witnesses' eyes to the southeast Fresno street where he and Jose Dueñas lay dying.

One of them said he saw the two men hugging just before the gunfire and defense attorneys want a jury to believe they shot each other.

But analysts found evidence on their bodies indicating the shots came from at least 30 inches away.

"30 inches," said prosecutor Brian Hutchins as he demonstrated the distance on a yardstick. "They're somehow hugging, but you have to have a shot that's from 30 inches from the end of the barrel of the gun to the back of the head. It's not physically possible."

Hutchins says Gustavo Dueñas and Jorge Rodriguez planned to rob somebody and Reese is who they found.

And he says Rodriguez fits a witness' description of the person who had the gun after the gunshots.

"This thin, young Hispanic man appears to lean over, to look down at Calvin's body, kicks at him, spits on him, and calls him a 'b**ch a**'... and that vile word," Hutchins said.

But defense attorney Richard Esquivel says it makes more sense if it was Duenas' son who attacked the dying man and picked up the gun in the process.

"You can't infer from the fact that a person described someone as thin that Jorge is the shooter," Esquivel said. "You can't. That's about 100 steps in between that are missing before you get to Jorge."
A jury convicted Gustavo Dueñas on two counts of second-degree murder earlier this year.

The prosecutor says jurors can convict Rodriguez of murder even if they think Dueñas pulled the trigger if he aided and abetted in the crime.
Report a correction or typo
Copyright © 2021 KFSN-TV. All Rights Reserved.
More Videos
From CNN Newsource affiliates
TOP STORIES