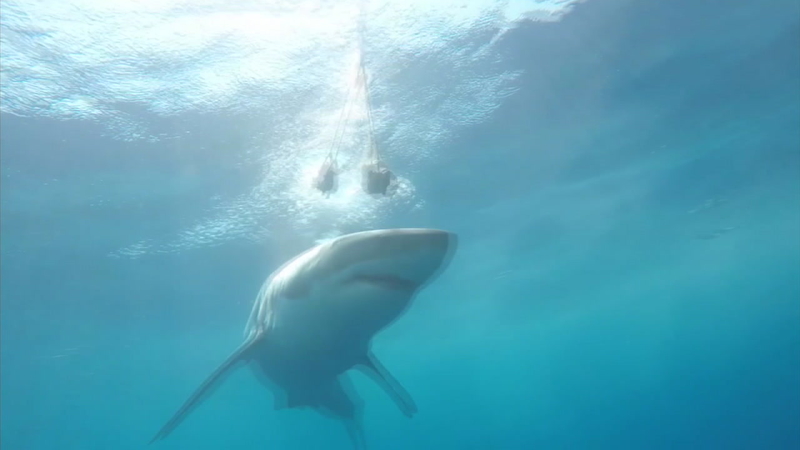 NEWPORT BEACH, Calif. -- The city of Newport Beach launched a pilot program with Australian company Smart Marine Systems, designed to detect sharks in the water off the Balboa Pier.

A buoy roughly 250 feet from the end of the pier creates a "virtual net" in the water. It uses high-tech sonar to identify sharks.

"You can't see through it, and you can't see under it, so this is just another tool that gives people eyes under the water they've never had before," said Craig Anderson, the founder of Smart Marine Systems.

The marine monitoring system uses multi-beam sonar placed on the ocean floor to create 3D imagery of what's below the surface.

"It will provide information about that animal, its size, its location and the direction it's headed," said Anderson.

The company has been testing and using the system in Australia. They've collected data and created algorithms based on different animals' swim pattern, which is how the computer knows if a shark is close.

The system then sends an alert on an application to lifeguards, so they can verify and warn swimmers or close the beach.

"Provide warnings to swimmers before the shark and them share the same proximity, so really speeds up the process a lot," said Interim Chief Lifeguard Brent Jacobsen from the Newport Beach fire department.

The project launch comes just two weeks after a teenage boy was attacked by a shark off the coast of Encinitas. And two years after triathlete Maria Korcsmaros was nearly killed by one in Corona Del Mar.

"Knowledge to say, OK, something's out there, what is it and if it's a shark, let's be prudent, let's be proactive and let's keep people safe," said Korcsmaros.