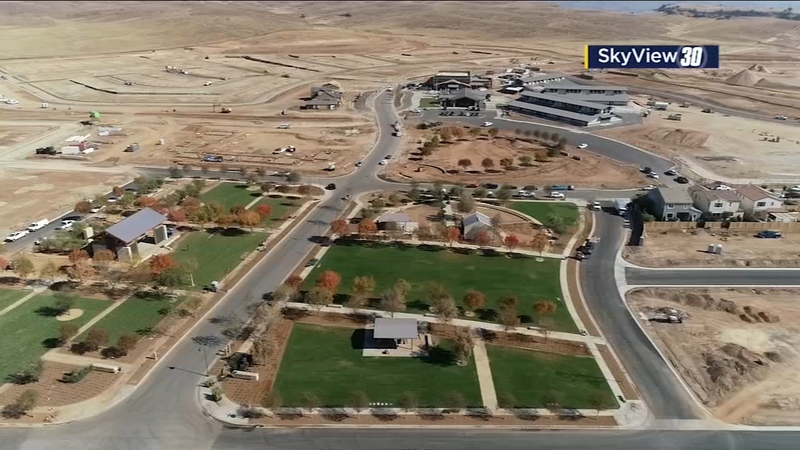 MADERA COUNTY, Calif. (KFSN) -- It's been 14 years in the making, but a major housing development in Madera County is about to open to the public.

Tesoro Viejo is a master-planned community off Highway 41 and Road 204.

A longtime dream is becoming a reality for the McCaffrey family, as the Tesoro Viejo master planned community comes together.

"Live, work, play and we believe that's exactly what Tesoro Viejo will offer to its residents," said Karen McCaffrey who is the Tesoro Viejo Development Vice President.

Tesoro Viejo is part of the Rio Mesa area plan which was approved by Madera County supervisors in 1994. Several home developments are planned in Madera County that could one day add as many as 100,000 people.

Tesoro is a 1,600-acre master planned community and will have 400 acres of natural open space, parks and walking trails.

A resort-style club is also under construction.

The development will have nine villages and we got a first-hand look at its new Altura collection models in Hillside Village.

"These are fun fresh beautiful homes. they range in square footage from 1,580 to 2,200 square foot,' said McCaffrey. "They go up to 4 bedrooms and a tandem three car garage. The other builders are K. Hovnanian and also Doctor Horton."

The homes are nearby Hillside School, which is already open.

In the Town Center, a Sheriff's substation and fire station have been built.

"So we don't have to take a fire station from another community to serve the citizens that are going to be living in Tesoro Viejo, we were able to work on an agreement to bring fire protection to Tesoro Viejo and be able to provide that," said Madera-Mariposa-Merced Unit Chief Nancy Koerperich. "As the homes are built here, the fire protection will improve so it's very exciting collaborative agreement."

The development has also taken steps to secure water.

"We have a firm and a guaranteed contract with the Madera irrigation district to provide surface water for the entire Tesoro community. In addition to which we have under construction and will soon be completed, a new state of the art, water, and wastewater treatment facility," said McCaffrey.

Builders say people could move into homes sometimes as early February in 2019.