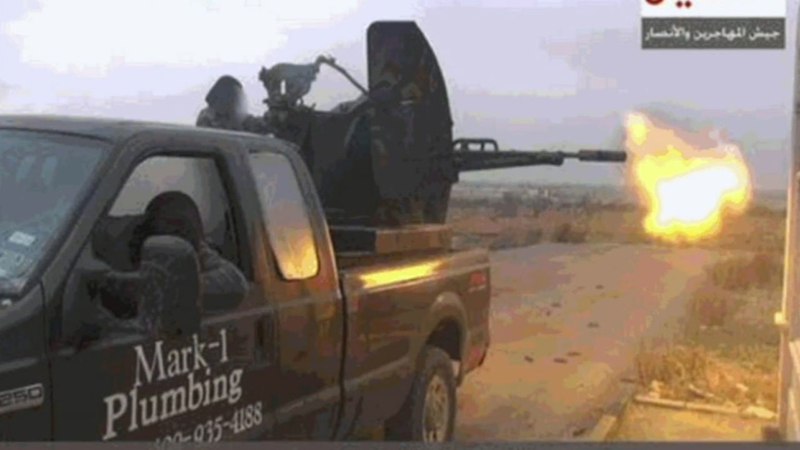 Plumber suing after ex-car ends up with Syrian fighters

TEXAS CITY, TX -- A Texas City-based plumbing company filed a lawsuit against AutoNation Ford Gulf Freeway for failing to remove a company decal on a truck before reselling it.

The Ford F-250 pickup truck had the company name, Mark-1 Plumbing, and phone number printed on the side of the truck. The company information was never removed from the truck, and the truck ended up in the hands of fighters in Syria. A picture of the truck loaded with heavy artillery appeared in a terrorist propaganda video.

Since then, Mark-1 Plumbing employees have received death threats, and their business has suffered, according to attorney Craig Eiland.

"His secretary was recently called an ISIS *****," Eiland said, "Some (threats) were scary, some were people saying, 'I'm gonna kick your ***. You don't want to be an American, get outta here and I'll help you go."

"The son started to take the decals off and was told, 'Don't take it off. You might scratch the paint. We will do it,'" Eiland said.

"We immediately sent the vehicle to auction, and the understanding was that the markings would come off the vehicle," Cannon said. "I'm not sure where the breakdown was between AutoNation and the auction. It's an unfortunate situation."

The owner of Mark-1 Plumbing, Mark Oberholtzer, is currently on a business trip in McAllen, TX. His administrative assistant told Eyewitness News she is still afraid to come to work because she has received so many threatening phone calls.