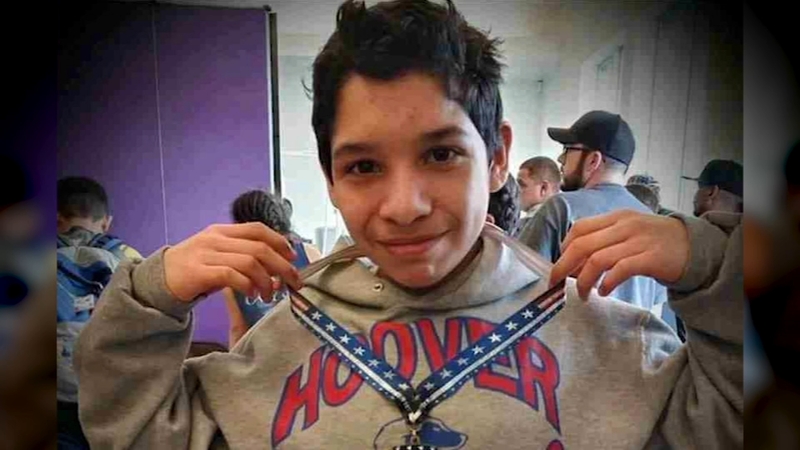 MERCED, Calif. (KFSN) -- A Merced mother is dealing with more heartache after her late son's memorial cross was stolen.

Rosalinda Vega says the cross had her son's name on it. It was placed steps from where he was killed, next to flowers on a hill.

Someone stole it on Tuesday, leaving her heartbroken.

"It's hard coming home every day and knowing your son is not here," Vega says.

She says the pain doesn't get any easier.

Candles sit next to photos of her son, 13-year-old Vicente Mancera.

The young boy was a Hoover middle school student, captain of the wrestling team, and excited to start the 8th grade.

But that all came to a tragic end in May when her son was hit and killed by a train on his way back home from school.

"You try to do for the rest of your children, but it's hard when you're missing one," she says.

Her source of solace was a memorial near the train tracks, marked by a handmade cross with the young boy's name on it and a lightning bolt symbolizing his favorite superhero - The Flash.

But on Tuesday, after the cross was stolen, there was a new feeling of pain.

"I was hurt someone would do that, it's very disrespectful. For me it was more important to put that there to have the future kids walk under the bridge versus over the bridge, help avoid this pain for another parent," she says.

She says she called both Merced city and county officials, and was told neither of them took it down.

Vega says the cross keeps her son's memory alive, remembering the boy taken from her too soon.

"He always overcame anything he put his mind to. That's what made him so great," she says.

All she wants now is for whoever took the cross to put it back.