Firefighters were faced with several challenges, including access and even toxic chemicals.
KFSN 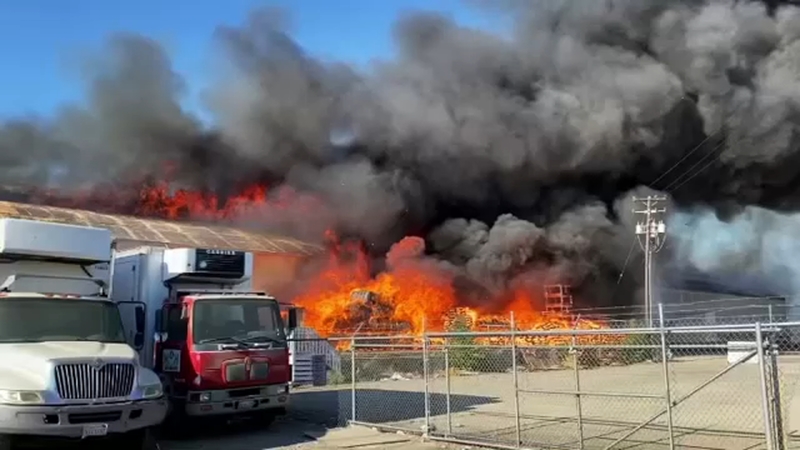 Black smoke from that massive four-alarm fire could be seen for miles.

Explosions went off and brush fires were sparked from downed power poles as crews scrambled to get the scene under control.

BREAKING NEWS: Fire crews are currently working on a heavy fire at an industrial building near Thorne & Napa. We’ve heard several explosions. A huge plume of smoke is being sent up into the air. @ABC30 pic.twitter.com/IYvm3KwRT6

More than three-quarters of the city's firefighters working on Saturday were assigned to the blaze and several CAL FIRE crews also joined in to help out.

They were faced with several challenges, including access and even toxic chemicals.

"We have exterior placards on the building that identifies there were hazardous materials in the building of various degrees," said Shane Brown with Fresno Fire.

The fire sparked just before 6:30 pm at a commercial building near Thorne and Napa.

Here’s a closer look at the fire. It appears flames have spread to at least two buildings. Firefighters tell us this is currently a 3 alarm fire, but it could be upgraded soon. @ABC30 pic.twitter.com/6ZRmPTUR6i

That's less than a mile away from the Fresno Chaffee Zoo.

Zoo officials said the animal care team was monitoring the threat of smoke. But because of the direction the smoke is blowing, they do not have any concerns for the animals' health and safety at this time.

Crews worked through Saturday night and Sunday morning to fully extinguish those flames and identify hotspots.

Fire officials said flames did the most damage to non-profit Neighborhood Industries.

Their distribution center was burned to the ground along with five of their vehicles.

Fire officials said flames did the most damage to non-profit Neighborhood Industries.

Ricky Bravo, the development director for the non-profit, said that's where they hold and process donations.

It contained mainly clothing and textiles, along with paper, plastic, and metals.

"I'm still in shock a little bit about how things are looking right now," he said.

The facility also served as an employment and job training center for 15 people within the organization.

The CEO said his plan is to keep those 15 employed.

"My goal essentially is to pump as many paychecks into Fresno's poorest neighborhoods as I can. We just survived the pandemic and I can't imagine a fire is going to stop us either," said Anthony Armour.

Armour said they plan to rebuild.

But for now, they hope to transition those 15 employees to their retail location in the Tower District and their second small warehouse.

Firefighting efforts proved successful and crews were able to keep the flames out of the front end of the burning building, occupied by Quality Foods.

"The food distribution section in the front, so far we have saved the majority of what's in there, contents as well as the building itself," said Brown.

The cause of the fire is still under investigation, but Brown said one of the owners advised him there's a history of homeless people breaking into the property. But Bravo said they haven't had that happen recently.

"In the past we did have some issues with break-ins, but our security out here had gotten really tight and it really hadn't been much of an issue," he said.

Questions also remain about the long-term impacts of the fire.

Crews urged drivers to avoid that Napa and Thorne area as they continued their firefight on Sunday morning.