4-alarm Fresno fire destroys 2 homes, over half of all city firefighters battle blaze

The two houses caught fire on Wilson and McKinley Avenues, near Fresno High School, just before 5:30 am.
KFSN
By Jessica Harrington 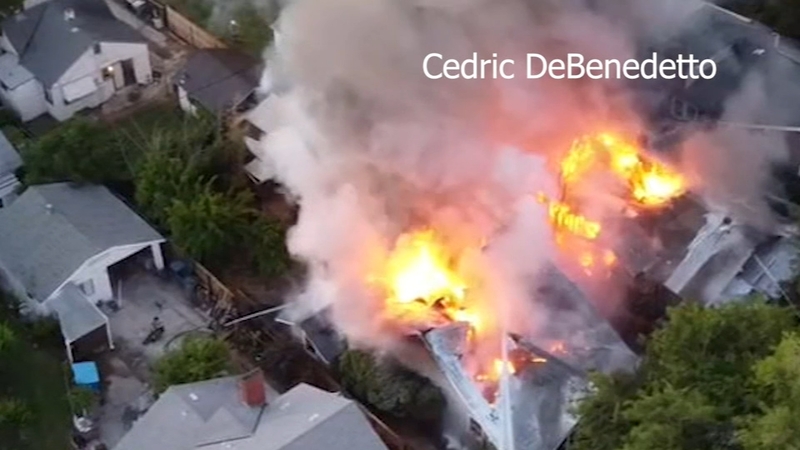 FRESNO, Calif. (KFSN) -- Investigators are looking into the cause of a massive blaze in Central Fresno Thursday morning.

The fire broke out at about 5:30 am at Wilson and McKinley Avenues, near Fresno High School.

As firefighters rushed to the blaze, helmet camera video from the Fresno Fire Department showed a large plume of black smoke could be seen from blocks away.

Officials said the first crews to arrive found a working attic fire with smoke and flames and that had spread to the home next door.

HELMET CAMERA VIDEO: A four-alarm fire destroyed two homes in Central Fresno early Thursday morning. @FresnoFire says at one point more than half the city's firefighters were on scene trying to put the fire out. @ABC30 pic.twitter.com/uBnU0stEjx

A second alarm was called for more resources, followed by a third and fourth alarm.

Investigators said everyone made it out of the home safely prior to their arrival.

Crews had trouble accessing the back of the home, downed power lines caused safety issues and winds also created a challenge for firefighters to keep the flames from spreading.

Winds also a challenge as firefighters tried to keep the flames from spreading.

"We had a slight breeze so it was extending fire into the backyards and spreading it out onto Roosevelt," said Battalion Chief Tim Fulmer.

FOUR-ALARM FIRE: Drone video from ABC Insider Cedric DeBenedetto shows flames shooting from the roof of both homes as crews worked to put it out. @ABC30 pic.twitter.com/IX8rOIUQSu

Despite the challenges, officials said they were able to stop the flames from reaching nearby homes.

Once they got control of the fire, crews carried out some of the items from inside one home that weren't heavily damaged.

Battalion Chief Fulmer said this is a good reminder to check your smoke detectors, because they can save your life.

"Especially in middle of the night, smoke detectors, they will wake you up. Smoke in your house won't necessarily wake us up, but smoke detectors will.

Fire officials are still trying to determine if the two homes had smoke detectors.

Three adults were displaced and are being helped by Red Cross.