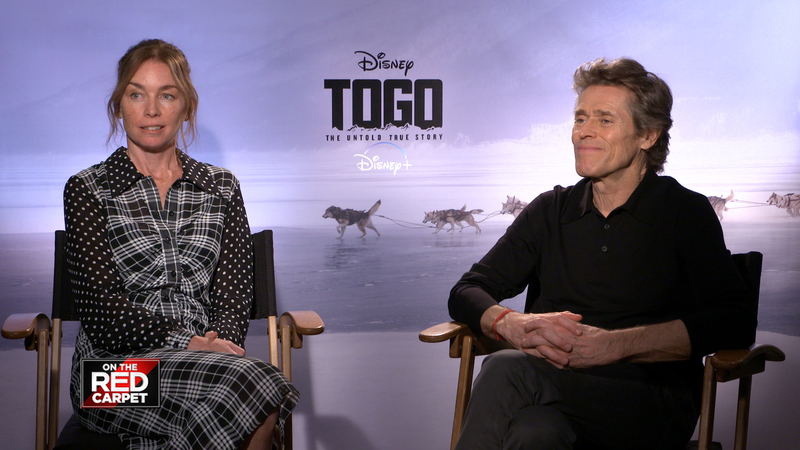 Los Angeles -- From Disney+, "Togo" is the untold true story set in the winter of 1925 that takes you across the treacherous terrain of the Alaskan tundra for an exhilarating and uplifting adventure that will test the strength, courage and determination of one man, Leonhard Seppala, and his lead sled dog, Togo.

"I read the script and thought wow," Dafoe told On The Red Carpet.

"I thought it was a really beautiful love story between a man and his dog," Dafoe's co-star Julianne Nicholson added. "I loved showing the strength of the woman in this partnership," Nicholson said.

"The story had a lot of attractive things that you don't quite realize until you inhabit it," Dafoe shared. This included Willem needing to learn how to mush and to endure the harsh conditions shooting the film on location in the Canadian Rockies.

"There are a lot of action sequences in which I'm mushing," he says. "So, of course, I had to learn how to do it-how to deal with the dogs, hook them up, direct them, know what they respond to and when they need water.

And while Togo, a Siberian Husky played mostly by a 5-year-old named Diesel may have stolen Dafoe and Nicholson's character's hearts, On The Red Carpet was surprised to learn that neither actors had ever owned dogs before.

"I would love to, but I think I travel too much," Dafoe told us.