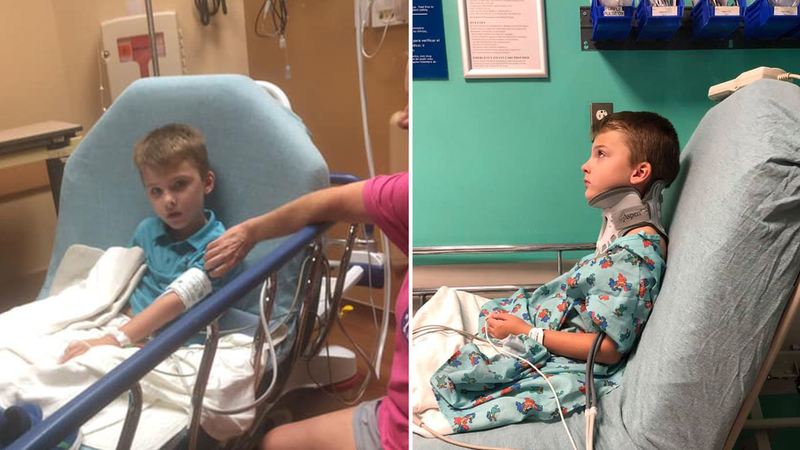 TOMBALL, Texas -- An 8-year-old Tomball student is recovering after his family says he was beaten in a bathroom and found unconscious at school.

Christian Boynton was hospitalized after his family said he was attacked at Lakewood Elementary School.

Boynton's parents said it all stems from bullying, and that the students that assaulted their son followed him from the school bus to the restroom.

The boy's parents were called around 9 a.m. Tuesday about what happened. The student was taken to a Tomball hospital, but when doctors found minor bleeding on the brain, Boynton was transported to Texas Children's Hospital.

He has since been released.

Tomball ISD confirmed in a statement Wednesday that a student was involved in an "incident in the bathroom between several students."

The boy's sister told Eyewitness News the family hopes the story will highlight the serious crisis of bullying on school campuses.

Tomball ISD told ABC13 it won't release any other details out of respect for the student's privacy.

The district also says it is "thoroughly investigating the incident and will take appropriate disciplinary measures for all those involved."

Here is the full statement released by the district:
"Tomball ISD is aware of an incident in the bathroom between several students at one of our elementary schools that resulted in one student being sent to the hospital with an injury. That student has since been released home. Out of respect for the family and the student's privacy, we are not providing any more details on the incident at this time. We are thoroughly investigating the incident and will take appropriate disciplinary measures for all those involved. As always, student safety is our first priority in Tomball ISD."
Report a correction or typo
Related topics:
texas newsassaultchild injuredbeating
Copyright © 2022 KTRK-TV. All Rights Reserved.
TOP STORIES
Le Grand woman charged with 3 counts of murder for deaths of children
Man shot and killed in central Fresno, police say
4 families displaced after apartment fire in NE Fresno
New details emerge in killing of mother and grandfather in SE Fresno
DA to pursue death penalty against 3 accused in Fresno mass shooting
2 NYPD officers shot, 1 fatally, responding to domestic violence call
Health officials credit vaccine for low COVID rates at nursing homes
Show More
Ag leaders working to protect Valley farmworkers during Omicron surge
1 killed, 3 injured in crash on Highway 41 in Fresno County
UC Merced to bring back students in stages for in-person learning
CA proposal would let older kids get vaccines without parents' consent
144th Fighter Wing gets glimpse into future with 'robot dog'
More TOP STORIES News