NEW DETAILS: 13 siblings were beaten, choked and only allowed to shower once a year 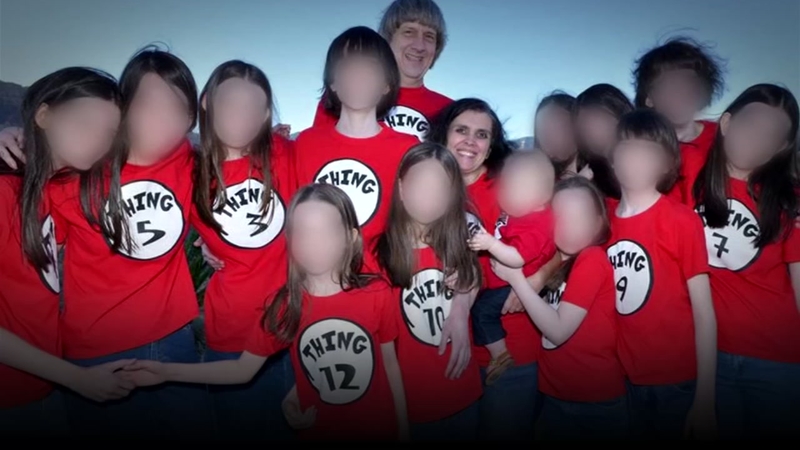 RIVERSIDE, California -- A California couple tortured a dozen of their children for years, starving them to the point that their growth was stunted, chaining them to their beds for up to months, preventing them from using the toilet at times and forbidding them from showering more than once a year, a prosecutor said Thursday.

David Turpin, 56, and Louise Turpin, 49, were charged with multiple counts of torture, child abuse, dependent adult abuse and false imprisonment. David Turpin was also charged with performing a lewd act on a child under age 14.

The litany of physical and emotional abuse was enough to invoke a house of horrors that apparently went unnoticed for years in California and Texas until Sunday, when a 17-year-old girl managed to escape and call 911.

The girl and her siblings had plotted the escape for two years, Hestrin said. Another girl who escaped out a window with the teen turned back out of fear.

The parents of 13 children and young adults have plead not guilty in a California court to numerous charges that they tortured and abused the siblings for years. (Jan. 18)

When deputies arrived at the four-bedroom, three-bathroom house on a dead-end street in Perris, about 60 miles (97 kilometers) southeast of Los Angeles, they were shocked by what they found.

Malnutrition was so severe that it was consistent with muscle wasting and had led to cognitive impairment and nerve damage, Hestrin said. The oldest child, a 29-year-old woman, weighed 82 pounds. A 12-year-old was the weight of a typical 7-year-old.

Some of the 13 children had been isolated so long they did not know what a police officer was.

The victims range in age from 2 to 29. The torture and false imprisonment charges do not include the 2-year-old, who was not malnourished. All the children's names begin with the letter J, according to court documents that didn't provide their full names.

The parents were jailed on $12 million bail each after pleading not guilty Thursday at their first court appearance. If convicted, they could be sentenced to life in prison.

David Turpin's lawyer, deputy public defender David Macher, had only begun to investigate the allegations, but said the case was going to be a challenge.

"It's a very serious case," he said. "Our clients are presumed to be innocent, and that is a very important presumption."

David Turpin's father, James, the grandfather to the children, said from his home in Princeton, West Virginia, that he did not believe the reports about the abuse.

"I'm going to talk with the children, find out the real story on this as soon as I can get a call through to them," James Turpin told The Associated Press.

David Turpin had worked as an engineer for both Lockheed Martin and Northrop Grumman. Louise Turpin identified herself as a housewife in a 2011 bankruptcy filing.

The charges include allegations dating to 2010, when the couple moved to Riverside County from outside Fort Worth, Texas.

The abuse began in Texas with the children being tied to beds with ropes and then hog-tied, Hestrin said. When one child was able to wriggle free, the couple began restraining them with chains and padlocks - for up to months at a time, Hestrin said.

At one point in Texas, the parents lived in a separate house from most of the children and dropped off food to the others from time to time, Hestrin said.

When not restrained, the children were locked in different rooms and fed little on a schedule.

On Sunday, three children had been shackled to beds, though the parents freed two of them - ages 11 and 14 - when officers knocked on the door, Hestrin said. Deputies found a 22-year-old chained to a bed.

Human waste in the house indicated the children were prevented from using the toilet. Sheriff's deputies said the stench in the house was overwhelming.

The children never received dental care, and they had not seen a doctor in more than four years. When the girl who escaped was asked if any pills were in the home, she did not understand what medication was.

The children, who were schooled at home, were rarely seen outside the house, though the parents posted photos of them smiling together at Disneyland and in Las Vegas, where the couple renewed their wedding vows.

In addition to raising them largely in isolation, the parents may have been able to hide the abuse by functioning while other families slept. The children were reared on the graveyard shift, with the family staying up all night and going to bed shortly before dawn, Hestrin said.

In the neighborhood where the kids were hardly known, a steady flow of strangers visited the house Thursday and left stuffed animals and large bouquets of red heart-shaped balloons on the walkway. A home-made poster taped to the house said: "We stand united with the Turpin children."

Neighbor Josh Tiedeman-Bell grappled with how he and others in the tight-knit development that hosts an annual barbecue and Christmas decorating contest could be unaware of what happened there.

He recalled seeing the Turpin children doing yard work in the evenings but it didn't seem unusual in light of the blazing midday heat. He said a handful of the kids came to a neighborhood Christmas event one year and didn't say much, but he would never have thought this was why.

"We were all like a part of their nightmare," he said, fighting back tears.

While the children were deprived of food, the Turpin parents ate well and even tormented the children by putting apple and pumpkin pies on the kitchen counter, but not letting them have any, Hestrin said.

Similarly, the children were not allowed to play with toys, though many were found throughout the house - in their original packaging.

"This is depraved conduct," Hestrin said. "It breaks our hearts."

One of the only things the children were allowed to do was to write in their journals.

Investigators were combing through hundreds of journals found in the home, Hestrin said. They are expected to provide powerful evidence against the parents.