Alex Morgan at 2019 ESPYS: Women 'are more than just athletes' 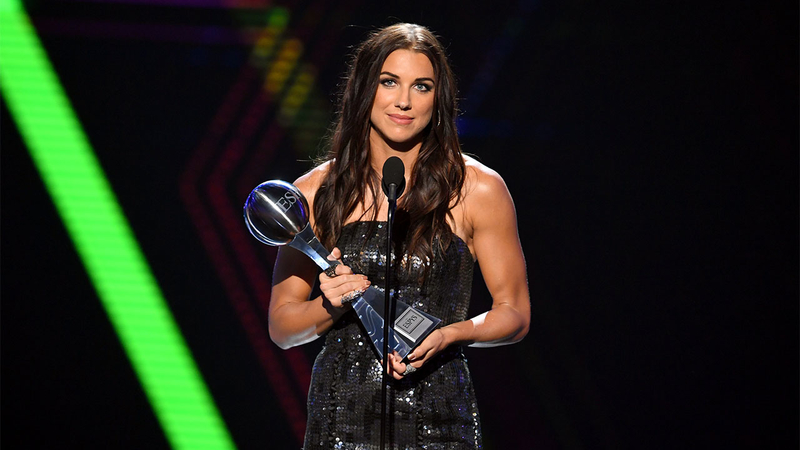 Alex Morgan at ESPYS: Women 'are more than just athletes'

LOS ANGELES -- As she accepted the ESPY Award for Best Female Athlete, Alex Morgan called for the momentum behind the team's call for gender equality to continue even after the World Cup.

"Thanks to ESPN for this award and also a big thank you for investing in the [National Women's Soccer League]. With our new television deal, we obviously enjoy the success on the biggest stage, but when the World Cup is behind us, it is the professional league that we need to continuously lift up and grow," she said.

"Investment in women and girls should not only occur on the playing field but in more storytelling of badass, amazing women who continue to show that we are more than just athletes," Morgan added.

Earlier Wednesday, team members joined New York Gov. Andrew Cuomo, a Democrat, as he signed a bill that expands gender pay equality in the state. He said women's soccer players should be paid the same as male players.

U.S. Sen. Joe Manchin, a Democrat, introduced a bill Tuesday that would bar federal funding for the men's 2026 World Cup until the U.S. Soccer Federation provides equal pay to the women's and men's teams.

At a City Hall rally after the parade, the presidential candidate de Blasio, also a Democrat, honored the team with symbolic keys to the city, saying it "brought us together" and "showed us so much to make us hopeful."

After chants for "Equal pay!" from the crowd, Cordeiro said women "deserve fair and equitable pay. And together I believe we can get this done."

PHOTOS: Athletes hit the red carpet for the 2019 ESPYS