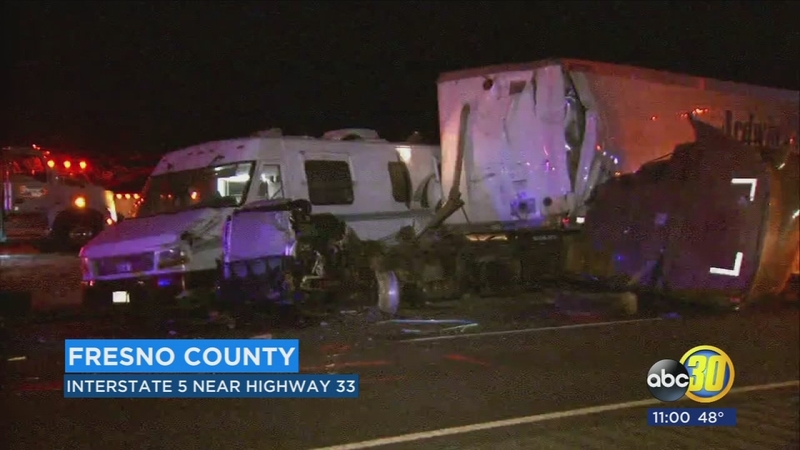 FRESNO COUNTY (KFSN) -- I-5 near Coalinga is back open after a deadly overnight crash backed up traffic for several miles. At one point cars were backed up nearly eight miles heading north on the five near Highway 33.

It was all because of a fatal crash involving a three semi-trucks and an RV.

The crash happened just after midnight when the Highway Patrol said a semi-truck driver failed to slow down with other traffic just before a construction zone and slammed into the back of an RV and two big rigs.

The driver of the semi that failed to slow down died at the scene. The passenger in that big rig was taken to Community Regional Medical Center in critical condition.

The driver of the RV, Doug Einarson, tells us when he got hit by the big rig he wasn't sure if he was going to make it out of the crash alive.

"I heard this bang. Then everything started falling and debris. The lights they kept going on and off. I knew I had been hit. Well, I thought well, I'm toast."

The RV driver from Canada lost his passport in the crash. He eventually found it but is still trying to figure out how he'll get home since his vehicle was destroyed.