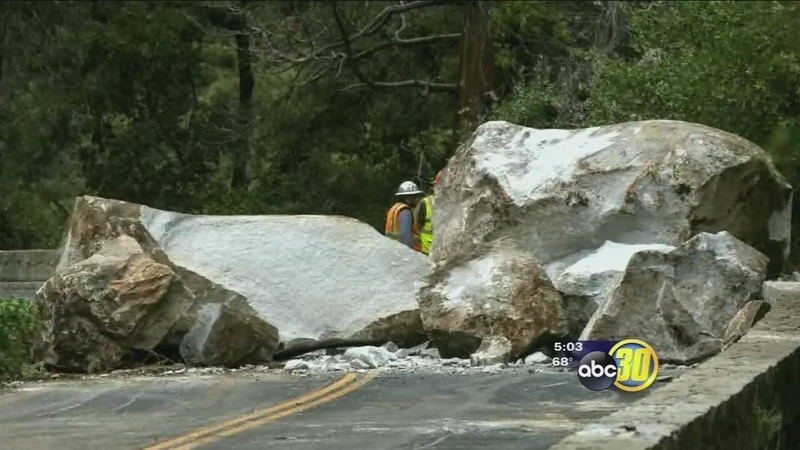 "We had like a day and a half here, so it kinda hurts our plans. We have to pass on some things we wanted to do," said Etay Many, park visitor.

Park officials said the massive rock fell onto El Portal Road on Monday afternoon. Since then, the entrance remained closed and crews spent Tuesday blasting the rocks and working to clear the roads.

"We're very thankful there was no damage to the road, the retaining wall did sustain some damage," said Scott Gideman, Yosemite National Park PIO.

Officials from the park ca not pinpoint the exact reason as to why the boulder fell, but they said the recent rain can be a triggering factor.

"The fact that you've got boulders high and a lot of rain it's a normal occurrence that rock fall does happen during this type of weather event," said Gideman.

Visitors, like Many, said they came from as far as Israel to see the park. He said now, they will have to take a detour which means another long drive, and a setback in their plans.

"We're limited in time so we two hours drive-- so it's going to be longer than we thought."

Many settled with taking pictures at the closed entrance, while others reluctantly turned around at the gate.

Luckily, no one was injured and the rocks did not damage any cars.

Some visitors, however, said they are going to make it work, and won't let a small bump in the road get in the way of their original plan.

"Maybe we go from another entrance-- it's going to take a long while to get there but hopefully we will get in eventually," said Yael Kirshemboim, park visitor.

There are two other entrances to the park that are open. Those are Highway 41 coming from Fresno, and the entrance on 120 west.