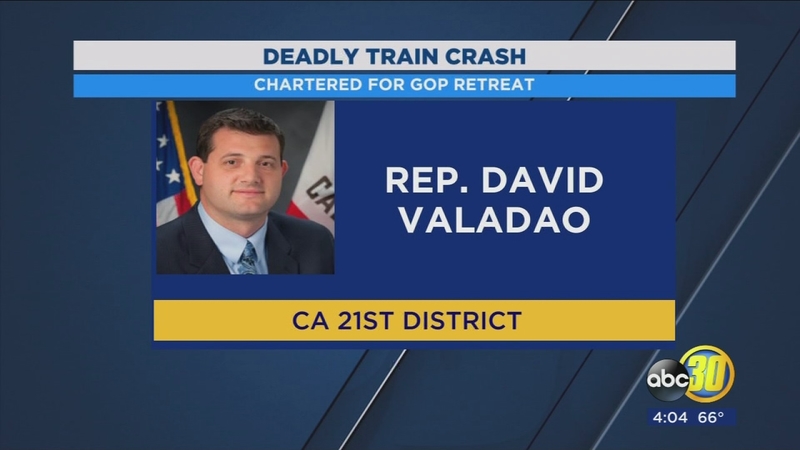 CROZET, Va. (KFSN) -- A train carrying dozens of Republican members of Congress to a strategy retreat in the countryside slammed into a garbage truck in rural Virginia on Wednesday, killing one person in the vehicle and sending several lawmaker-doctors rushing to help the injured.

No serious injuries were reported aboard the chartered Amtrak train, which set out from the nation's capital with lawmakers, family members and staff for the luxury Greenbrier resort in White Sulphur Springs, West Virginia. At least two other people in the truck were reported seriously hurt.

The collision happened about 11:20 a.m. in Crozet, about 125 miles (200 kilometers) southwest of Washington, tearing the truck in two, crumpling the nose of the locomotive and scattering trash alongside the tracks.

Rep. Robert Pittenger of North Carolina said he was standing at the train's refreshment stand, waiting to be served a soft drink, when he felt "an enormous slam. ... It was a huge jolt. We all hung on to whatever we had."

He said he looked out the window and saw a big pile of garbage, and it appeared the train had pushed the truck for a few hundred yards.

Authorities gave no details on the cause of the wreck, which took place at a crossing protected by gates, flashing lights, bells and warning signs. The National Transportation Safety Board sent a team to investigate.

Benny Layne, on whose property the truck landed, said the crossing arms had been known to malfunction, sometimes coming down even though no train was approaching. Sometimes, he said, they stayed down for hours.

He said motorists would get out of their cars to help guide other motorists around the malfunctioning arms so they could cross the tracks.

"A guy was up here just yesterday or the day before taking a look at them," he said.

Carrie Brown, human resources manager at Buckingham Branch Railroad, which leases the stretch of track and is responsible for maintenance, said she was unaware of any problems with equipment at the crossing.

Florida Rep. Neal Dunn, a former Army surgeon, said he and other lawmakers who are doctors joined other passengers who are nurses or paramedics and jumped out with the basic medical gear they had. They broke into three teams to help the injured people in the truck, he said.

"The first gentleman was somebody who had really, really, really devastating injuries. We did try to resuscitate, but ultimately you had to realize it wasn't possible," Dunn said. He said another man in the truck was critically injured and a third was seriously hurt.

Sen. Bill Cassidy of Louisiana and his wife, both doctors, were among those who came to the rescue. He said he helped a man from the truck who was badly injured.

"My role was quite simple: I picked up his feet so the blood in his feet would go to his heart and his brain," Cassidy said.

Sen. Jeff Flake of Arizona said seeing the lawmakers who are doctors tending to the injured reminded him of the shooting of Rep. Steve Scalise at a GOP baseball practice last June.

"I thought then I never want to experience a day like this again," Flake said. "Unfortunately, it came too soon."

Officials gave varying figures on the number hurt. But Amtrak said two crew members and three passengers were taken to a hospital with minor injuries.

Minnesota Rep. Jason Lewis' staff tweeted that the first-term congressman was among those taken to the hospital and was later discharged after suffering a concussion. Others aboard the train reported bumps, bruises and sore joints.

The GOP policy retreat, an annual event, was scheduled to last three days and feature speeches from President Donald Trump and Vice President Mike Pence. By early afternoon, lawmakers were boarding buses to resume their trip.

Later Wednesday, Pence told Republicans at the party retreat that he knows "it's been a harrowing day for all of you." Pence, a former House member, said he has fond memories of the retreat and the train rides back and forth. "Just know our hearts are with you," Pence said.

Pence was the featured speaker Wednesday night at the GOP retreat. Trump was to address lawmakers Thursday.

Rep. James Comer of Kentucky said about 100 Republican lawmakers were on the train when the crash made him jump out of his seat.

Other doctor-lawmakers who assisted included Reps. Michael Burgess of Texas, Phil Roe of Tennessee, Larry Bucshon of Indiana and Roger Marshall of Kansas, according to those aboard.

House Speaker Paul Ryan of Wisconsin was on the train and was unhurt, aides said.