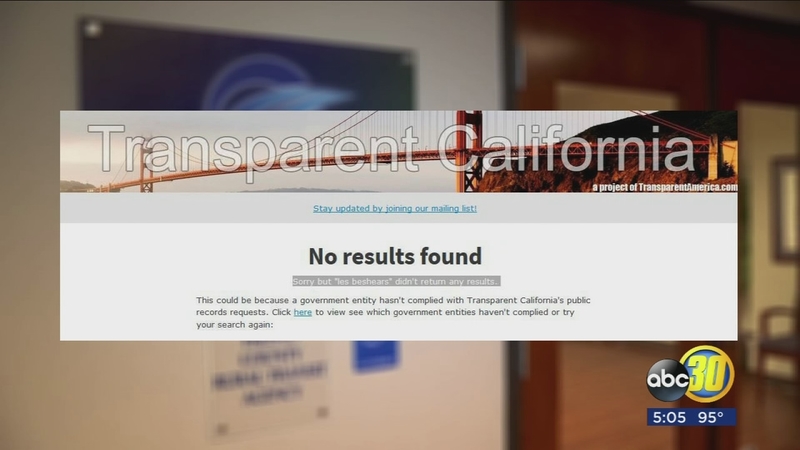 FRESNO, Calif. (KFSN) -- A government watchdog group says a couple Central Valley agencies are trying to keep financial information away from the public.

Transparent California has pay records dating back six years for more than two million government employees, but they still get static from some agencies when they try to follow the money trail.

Governor Jerry Brown took home a salary of almost $180,000 last year and a December pay raise made him the highest paid governor in the country.

And if you search the Transparent California database, you'll find out that number doesn't even include the $90,000 he gets in health care, pension and other benefits.


The government watchdog has compiled six years worth of taxpayer-funded payments to government employees, and legal analyst Tony Capozzi says it's critical information.

"The transparency in government is important to avoid any kind of corruption and kind of possible embezzlement or any kind of nefarious activity going on with public employees," he said.

Just this year, the City of Riverside changed policies based on a Transparent California revelation that a utilities dispatcher earned more than $250,000 in overtime pay.

But even as the database gets more exposure, some agencies are still fighting to protect the information. You won't find any information about how much taxpayers are paying Fresno Council of Governments Executive Director Tony Boren or what Les Beshears is taking home as the agency's finance director.

For at least three years, Transparent California says the COG has refused to put names to payments. So, they've gone to what they call a last resort: a lawsuit.

"We honestly dislike litigation," Robert Fellner with Transparent California said. "We wish there was a way to get governments to comply without litigation because ultimately that's a cost borne by the taxpayers."

An email from the Council of Governments shows they cited privacy concerns and a 2003 court ruling, but the state supreme court overruled it in 2007, saying the public's right to know outweighs privacy rights.

The city of Hanford has also refused to release the information since 2015, but the watchdogs say they'll keep fighting.

"This is for everyone who cares about good government," Fellner argued. "It's not an attack on any group of people at all."