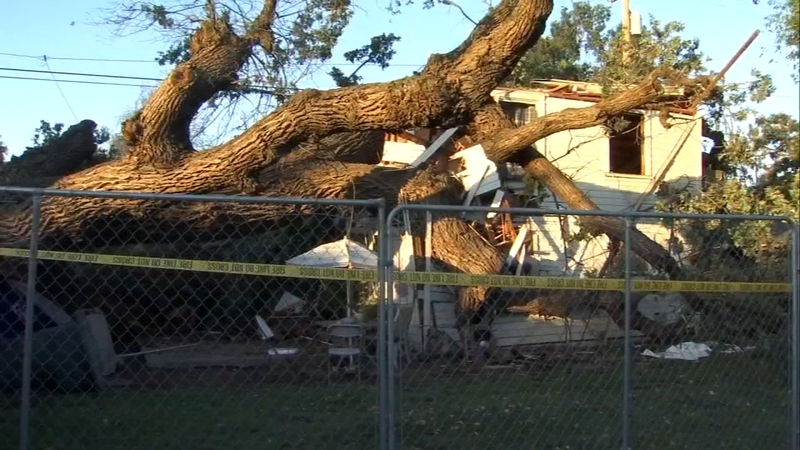 TULARE, Calif. (KFSN) -- A Tulare home has sustained major damage after a large Oak tree came crashing down onto it Tuesday night.

"It just, boom, you know, just like that. No warning, no nothing. Boom," Benny Cabral had just laid down to go to sleep.

"I think I was down for 10 or 15 minutes and all hell broke loose. I got up, yelling and screaming because I was barricaded in there," he said.

He was trapped in his upstairs apartment and had to be rescued by firefighters.

Downstairs Eloise Lopez was relaxing in her recliner when it fell.

"All of a sudden you know, this noise, it just came like thunder, like there was an earthquake. Ugly, terrible, it was loud," she said. "Wood was coming through the walls; I never been through anything like that."

The home was set-up like an apartment with Cabral living upstairs and Lopez living downstairs. Benny has lived in the home for 32 years. Eloise for 5. They say they were both concerned for each other.
"I heard my neighbor yelling for me and I'm up yelling for him, cause we were watching for each other, if we were alive," Lopez said.

Both were taken to the hospital for treatment of cuts and bruises, and bee stings from a hive that was in the trunk.

"There (were) bees inside of my apartment there were just stinging my ear, it was terrible, just terrible,"

Relatives are helping Benny and Eloise.

The old Oak is considered a heritage tree 300-400 years old. Arborist Jack Benigno says it's clear only about a quarter of the trunk was still living. He thinks the heavy air pressure caused by the high heat was enough to make it fall.

"It pushes down on a big tree with a one hundred foot shade spread on it and over they go," he said.

The residents said they had complained to the property owner that branches had been falling off the tree for the past few years.