KFSN
By Corin Hoggard
FRESNO, Calif. (KFSN) -- The moment of truth has arrived for the man who tried to rob a Fresno Starbucks but got stopped by a Good Samaritan.

Ryan Flores concedes he tried to rob the place, but he's still fighting the charge saying he assaulted the Good Samaritan with a deadly weapon.

The jury's out now, and their decision could have both criminal and financial effects.

The case against Flores comes down to a single moment in time.

"Look at the motions that the defendant was making when he used his right hand," prosecutor David Olmos told the jury. "You saw the blade in the defendant's right hand, came back across in the direction if Mr. Jerri's neck."

Prosecutors say Flores reached back and stabbed Cregg Jerri in the neck at a minute and 52 seconds into the Starbucks surveillance video.

Jerri watched Flores come into the store, and point a gun then a knife at the cashier. He grabbed a chair, walked up to Flores, and hit him.

From then on, the defense claims Jerri turned the tables: He was the aggressor, and Flores just wanted to leave.

"His desire was to get out of there was to escape," said defense attorney Richard Esquivel. "The video shows you everything you need to see."

Jerri suffered a stab wound to his neck and still has the scar to prove it.

But Flores says he acted in self-defense and doesn't even remember stabbing Jerri.

Prosecutors say he's a liar with a selective memory.

"If you find the defendant's story is not credible and that Mr. Jerri was stabbed at 1:52, this self-defense law goes right out the window," Olmos said.

He says it might've happened a few seconds later after Jerri took control of the knife.

And he says Jerri's the one who's lying, trying to cover himself for when Flores files a lawsuit against him.

"He made up a story about thinking Mr. Flores was coming at him," Esquivel said of the end of the fight.

"The video shows that's not what occurred. And then in court here, he lied to you."

Flores faces up to eight years in prison if he is convicted on both charges.

He has not yet filed a lawsuit against Jerri.
Report a correction or typo
Related topics:
fresno countytrialstarbucksrobberygood samaritan
Copyright © 2020 KFSN-TV. All Rights Reserved.
GOOD SAMARITAN 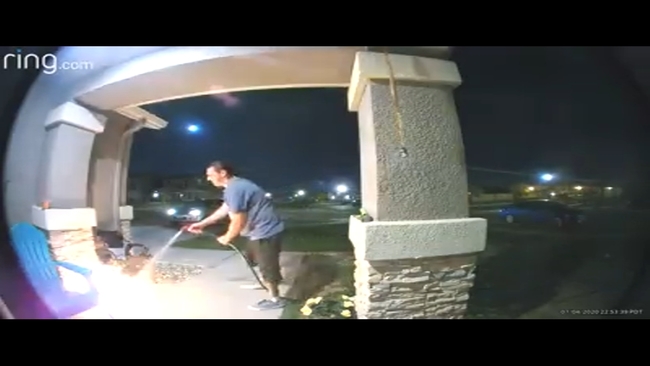