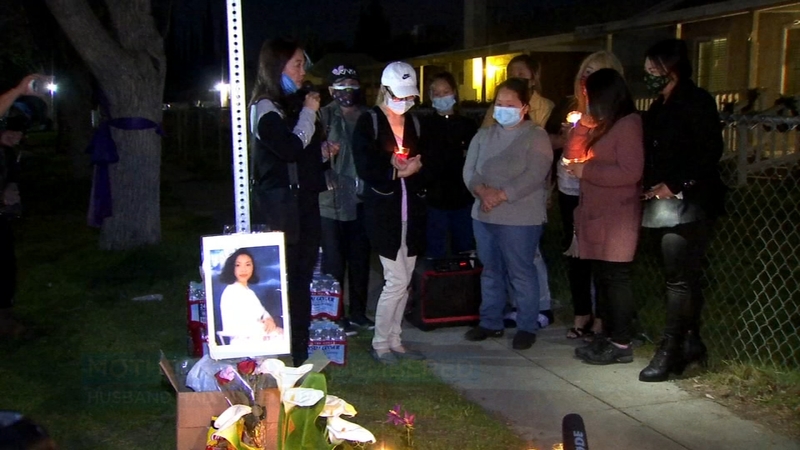 FRESNO, Calif. (KFSN) -- With heavy hearts and tears in their eyes, people gathered outside a home on Fifth and Lamona to pay their respects to True Vang, a mother of six they knew as Cindy.

Detectives say she was murdered by her husband.

Four of Vang's children, ranging in age from 9 to 17 years, were inside the house at the time.

Community members wrapped their arms around the hurting family.

"Tonight we gather here to tell you that we love you," said activist Paula Yang.

Court documents reveal a history of abuse between the couple.

In 2009, a case of domestic violence involving Yang and Vang was dismissed after both of them failed to appear in court.

Yang also has a criminal history.

In 2017, he was charged with a felony for fleeing a peace officer and driving recklessly.

Yang was sentenced to 2 years in prison but was let out early on good behavior.

RELATED: How Fresno's homicide rate compares to other California cities

Vang's relatives say she would talk about divorce.

Experts with the Marjoree Mason Center say that could have been a trigger.

"Anytime you will threaten to leave or challenge staying in a relationship will be a trigger point for additional control or a flare-up or what we call an explosion," said the center's executive director, Nicole Linder.

Marjoree Mason Center's incoming board president, Bonnie Her, said Hmong traditions could have made it hard for Vang to leave.

She said women who divorce are ostracized by their clan.

"Being a woman you are married into a family so when you get divorced you are alone," she said.

Her coworkers say she was an incredible cook who greeted every customer with a smile.

To honor Vang and raise awareness about domestic violence, her coworkers and other community members tied purple ribbons to the fence of her home.

They vowed her death will not be in vain.