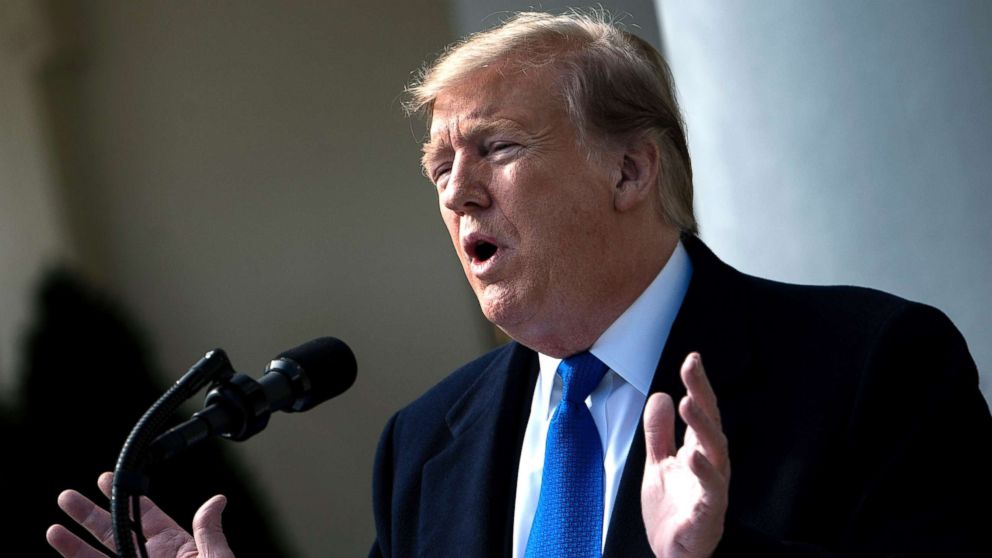 President Donald Trump on Wednesday continued to demand that California return billions in federal funds it received to construct a high-speed rail project between San Francisco and California -- a demand now joined by his Transportation Department and one the state's Democratic governor is calling "political retribution."

The Transportation Department -- the agency that doled out the nearly $3.5 billion -- has threatened to seize it back after California led the charge on Monday to sue Trump over his national emergency declaration to get funding for his proposed wall on the U.S.-Mexico border.

California's Democratic Gov. Gavin Newsom said in a statement Tuesday that Trump's calls are retaliation for California's role in leading a 16-state coalition's lawsuit, pointing to a Trump tweet Tuesday that mentioned both the lawsuit and said "California, the state that has wasted billions of dollars on their out of control Fast Train, with no hope of completion, seems in charge!"

"It's no coincidence that the administration's threat comes 24 hours after California led 16 states in challenging the president's farcical 'national emergency,'" Newsom said in a statement. "This is clear political retribution by President Trump, and we won't sit idly by. This is California's money, and we are going to fight for it."

A Trump tweet Wednesday referred to "cost overruns" and demanded: "Send the Federal Government back the Billions of Dollars WASTED!"

When California's Democratic Attorney General Xavier Becerra was asked at a press conference Wednesday what his reaction was to Trump's tweet, he answered with a slight shrug of his shoulders.

"Another day. What's new. Are you surprised? It is what it is, and the great thing about California and about getting to be the attorney general in the state of California is that we just keep moving forward. We're going to build high-speed rail. We're going to continue to grow as an economy," Becerra said. "We can say that with some optimism because we just keep doing stuff. On the other hand, others keep talking and doing nothing."

A change in the project's initial plan to have a high-speed rail stretch across the state was cited by both the president and the Transportation Department's insistence that the money be returned.

In a letter Tuesday, the Transportation Department notified the California High-Speed Rail Authority that it intends to terminate its agreement and end the approximately $929 million California received for the project under the Obama administration.

The letter, signed by Federal Railroad Administrator Ronald L. Batory, cited multiple "failures" of the project, such as its inability to be completed by 2022 and Newsom's recent comments at his State of the State address last week where he announced a change in plans for the rail.

Newsom said efforts will be focused on finishing construction in the Central Valley, rather than the original plan that "would cost too much and take too long."

According to the Associated Press, costs for the project have doubled to $77 billion and the anticipated date for the rail project to be completed has been pushed back 13 years to 2033.

In a separate statement Tuesday, the Transportation Department said it was also "actively exploring every legal option" to seize back $2.5 billion of federal funds the Federal Railroad Administration granted for the project.

"The agency reviewed options regarding funding for this project last week following the Governor's comments made during his State of the State address," a Transportation Department spokesperson said in a statement Wednesday. "Governor Newsom's recent comments significantly alter the scope and objectives of the California High Speed Rail project, eliminating the objective for which Federal funding was originally awarded - end-to-end high speed rail service from San Francisco to Los Angeles."

In a statement Wednesday, Brian Kelly, CEO of the California High-Speed Rail Authority, said the authority has received the letter and is preparing a response by the March 5 deadline outlined in it.

"We remain committed to delivering high-speed rail and its many economic, environmental, and mobility benefits to Californians," Kelly said in the statement.

The 16-state coalition's lawsuit filed Monday alleges that the president's emergency declaration is unconstitutional. Trump foresaw the blitz of legal challenges that have followed his national emergency declaration and he criticized California's "Fast Train project" on Twitter Tuesday for being "hundreds of times more expensive than the desperately needed Wall!"

"It is time is to move on from the broken high-speed rail project and redirect our efforts to infrastructure projects that work for Californians," McCarthy said.

Last week, Newsom suggested in a tweet that Trump was trying to get money for his border wall.

"This is CA's money, allocated by Congress for this project. We're not giving it back. The train is leaving the station - better get on board! (Also, desperately searching for some wall $$??)," Newsom tweeted.

When asked specifically on Wednesday if any of the $3.5 billion in federal funds could be used toward Trump's border wall if returned, a Transportation Department spokesperson said: "Under existing appropriations, these funds could become available for other passenger rail projects."