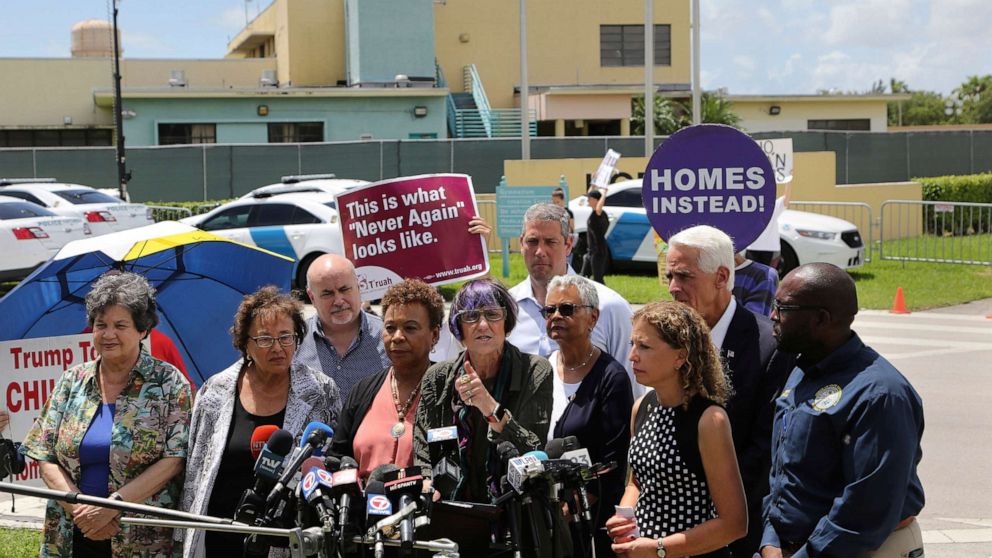 The suspension was confirmed by government officials who say demand for beds at the temporary influx shelter has declined, although 1,300 teens remain at the site and local officials are concerned that proper hurricane evacuation plans are not in place.

Democrats have called for the site to be closed, and several 2020 presidential candidates have joined protests against the facility. On a recent trip, Sen. Elizabeth Warren said she saw children there "being treated like prisoners."

Sen. Bernie Sanders called the facilities "racist child prisons" and pinned the blame on the Trump administration -- although the practice of holding kids in such facilities was also employed under President Barack Obama.

Democratic Rep. Debbie Mucarsel-Powell, whose district includes the grounds of the Homestead facility, expressed concern that federal officials don't have a plan to evacuate the shelter in the event of a hurricane.

"I still have not seen a hurricane evacuation plan for the Homestead facility, and as long as they continue to hold children during hurricane season, this is an extremely dangerous form of neglect," she tweeted Tuesday.

Amnesty International -- a group that details abuse and torture by governments -- is calling today for Homestead to close.

In a new report, Amnesty International said the center for undocumented migrant children had an "inadequate system" for kids to report sexual abuse by staff.

The facility provides booths with direct phone lines for children to report abusive behavior. But the Executive Director of Amnesty International USA, Margaret Huang, told ABC News there are still barriers for those children who need to report malpractice.

A spokesperson for Caliburn, the private company contracted to run Homestead, disputed Amnesty International's claims, saying children also have access to the lawyers to report abuse on site.

"We follow [Office of Refugee Resettlement] policy in reporting any significant incidents or sexual abuse allegations revealed on site," spokesperson Tetiana Anderson said in a statement to ABC News.

The Amnesty International inspectors also raised concerns about privacy for children using the bathroom, saying there were only shower curtains and no doors in some of the kids' restrooms.

When minors are taken into Border Patrol custody at the southern border, the agency classifies them as "unaccompanied alien children" if they are not traveling with a parent or legal guardian. The Department of Homeland Security is then responsible for taking them to the government network of private care providers.

The federal government uses facilities like the one at Homestead to handle surges of new arrivals when the network of nonprofit and commercial housing organizations runs out of space to take children from the border.

Those "temporary influx shelters" are used as a last-resort option, but an HHS spokesperson said there's no plan yet to close the shelter completely.