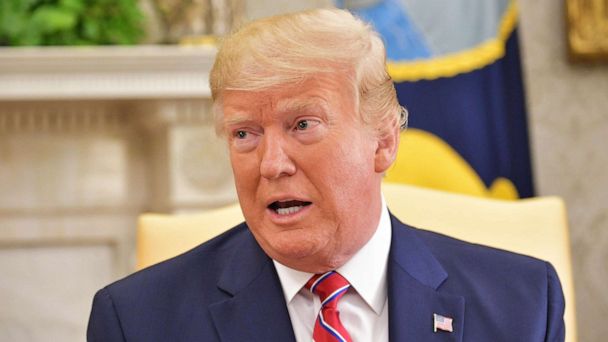 The Trump campaign is cutting ties with a number of its pollsters after internal figures leaked showing President Donald Trump down by wide margins in key battleground states.

Multiple sources familiar with the matter confirmed to ABC News that the campaign will part with some of its pollsters after the leak, which showed data that the president was losing in key must-win states based on internal polling done in late March of this year.

Veteran political pollsters Tony Fabrizio and John McLaughlin will remain as campaign pollsters, according to someone close to the campaign.

The news follows a report by ABC News, which revealed -- for the first time -- internal figures from the Trump campaign's own polling, that had the president trailing former Vice President Joe Biden by double digits in Pennsylvania and Wisconsin. The two states were critical to Trump's election in 2016.

The leaked data also indicated Biden was leading by seven points in Florida, where the president is set to officially kick-off his 2020 campaign Tuesday.

Trump and the campaign had repeatedly denied that such data existed, but when presented by ABC News with these numbers last week, the campaign confirmed the data saying, in a statement, that the numbers were old and that they have seen huge swings in Trump's favor.

"These leaked numbers are ancient, in campaign terms, from months-old polling that began in March before two major events had occurred: the release of the summary of the Mueller report exonerating the President, and the beginning of the Democrat candidates defining themselves with their far-left policy message," Trump campaign manager Brad Parscale told ABC News in the statement. "Since then, we have seen huge swings in the President's favor across the 17 states we have polled, based on the policies now espoused by the Democrats. For example, the plan to provide free health care to illegal immigrants results in an 18-point swing toward President Trump."

Attorney General William Barr's summary of special counsel Robert Mueller investigation into Russian meddling in the 2016 election was released on March 24. While the Trump campaign's full poll, which canvassed 17 states, was already in the field, it was well underway for four additional days after the release of Barr's letter to the public. The poll was conducted from March 15 through March 28.

During an exclusive interview with ABC News Chief Anchor George Stephanopoulos, the president denied such polling existed and said his internal numbers showed that he is "winning everywhere."

"I just was given a meeting with my pollster, who -- I frankly don't even believe in pollsters if you want to know the truth, you just run a campaign and whatever it is, it is -- but I just had a meeting with somebody that's a pollster and I'm winning everywhere, so I don't know what you're talking about."
Report a correction or typo
Related topics:
abc newsnational
Copyright © 2020 ABC News Internet Ventures.
More Videos
From CNN Newsource affiliates
TOP STORIES