A billboard in Clovis is getting nationwide attention 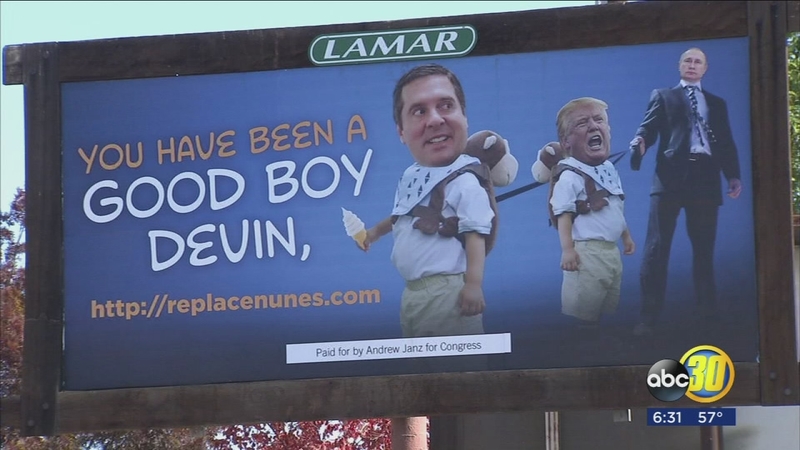 A small billboard in Clovis is getting nationwide attention

The message reads, "You have been a good boy Devin." It is part of Democrat Andrew Janz campaign for Nunes' seat.

Andrew Janz said, "Look I've been in this election about ten months now and every once in a while we try to have a little fun."

Fun aside, Janz says the idea was to remind voters Nunes is under an ethics investigation, accused of trying to interfere with the investigation into alleged Russian involvement in Trump's campaign.

"And he's operating more like a white house Trump staffer than he is a member of the house of representatives, somebody that is constitutionally obligated to be a check on the executive branch," Janz said.

The Russian controversy has dogged Nunes.

Hundreds of protestors gathered at an appearance in Fresno last spring but Political Science Professor Thomas Holyoke doubts the Russian issue and Nunes ties to Trump will have much of an impact in the 22nd Congressional District, which includes Northwest Fresno, Clovis, Visalia, and Tulare.

Holyoke explained, "I don't think that explicitly linking Devin Nunes to Donald Trump is going to hurt Devin Nunes all that much in fact Devin Nunes may see it as a strength in his district."

Andrew Janz is a Fresno County Prosecuting attorney, one of six Democrats, and one Libertarian candidate expected to be on the March primary ballot along with Republican Nunes.

The top two vote-getters face off in the general election in November of next year.