AP
By Sara Burnett, Tom McCarthy and Sean Murphy
TULSA, Okla. -- The Oklahoma Supreme Court on Friday rejected a request to require everyone attending President Donald Trump's rally in Tulsa this weekend to wear a face mask and maintain social distancing inside the arena to guard against the spread of the coronavirus.

The court ruled that the two local residents who asked that the thousands expected at Saturday night's rally be required to take the precautions couldn't establish that they had a clear legal right to the relief they sought. Oklahoma has had a recent spike in coronavirus cases, but in a concurring opinion, two justices noted that the state's plan to reopen its economy is "permissive, suggestive and discretionary."

"Therefore, for lack of any mandatory language in the (plan), we are compelled to deny the relief requested."

The request was made by John Hope Franklin for Reconciliation, a nonprofit that promotes racial equality, and the Greenwood Centre, Ltd., which owns commercial real estate, on behalf of the two locals described as having compromised immune systems and being particularly vulnerable to COVID-19.

Meanwhile, Tulsa's Republican mayor, G.T. Bynum, rescinded a day-old curfew he had imposed for the area around the BOK Center ahead of the rally. The curfew took effect Thursday night and was supposed to remain until Sunday morning, however Trump tweeted Friday that he had spoken to Bynum and that the mayor told him he would rescind it.

Bynum said he got rid of the curfew at the request of the U.S. Secret Service. In his executive order establishing the curfew, Bynum said he was doing so at the request of law enforcement who had intelligence that that "individuals from organized groups who have been involved in destructive and violent behavior in other States are planning to travel to the City of Tulsa for purposes of causing unrest in and around the rally."

Bynum didn't elaborate as to which groups he meant and police Capt. Richard Meulenberg declined to identify any. Although President Trump has characterized those who have clashed with law enforcement after George Floyd's death in Minneapolis as organized, radical-left thugs engaging in domestic terrorism, an Associated Press analysis found that the vast majority of people arrested during recent protests in Minneapolis and Washington, D.C., were locals.

Trump on Friday morning tweeted: "Any protesters, anarchists, agitators, looters or lowlifes who are going to Oklahoma please understand, you will not be treated like you have been in New York, Seattle, or Minneapolis. It will be a much different scene!"

White House press secretary Kayleigh McEnany clarified later that Trump's tweet did not refer to all protesters, rather only to those who are "violent."

Bynum's order said crowds of 100,000 or more were expected in the area around the rally.

Trump's campaign manager, Brad Parscale, told Fox News on Friday that those unable to get into the arena are expected to attend what he described as a "festival" outside where the president might also appear. He said he would "probably be wearing a mask" during the event, which Republican Gov. Kevin Stitt has said will be safe.

That has not reassured the arena's management, who requested a written health and safety plan from the Trump campaign on Thursday. In a statement to Oklahoma City television station KFOR, rally organizers appeared unimpressed but said they would review the request.

The Trump campaign said it takes "safety seriously," noting that organizers are providing masks, hand sanitizers and doing temperature checks for all attendees.

McEnany said she and many other White House staffers would be traveling with Trump to Tulsa and that she wouldn't wear a mask at the rally, calling it a personal decision and noting that she is regularly tested for COVID-19 because she works in close proximity to Trump. She declined to say whether Trump was taking and additional personal precautions ahead of the rally. The nation's top public health professionals strongly recommend wearing a mask when social distancing can't be maintained, as will be the case Saturday.

In a Facebook post Tuesday, the mayor confessed to feeling anxious about the potential spread of the coronavirus by people attending the rally.

The city's health director, Dr. Bruce Dart, has said he would like to see the rally postponed, noting that large indoor gatherings are partially to blame for the recent spread of the virus in Tulsa and Tulsa County.

The rally was originally scheduled for Friday, but it was moved back a day following an uproar that it otherwise would have happened on Juneteenth, which marks the end of slavery in the U.S., and in a city where a 1921 white-on-black attack killed as many as 300 people.

Marc Lotter, the Trump campaign's strategic communications director, told MSNBC on Friday that the rally "is really a celebration of an America that's reopening."

He said the campaign asks that supporters to stay away from the rally if they or a family member are in a high risk category for serious complications from the coronavirus.

That message has not been widely echoed by the president or his campaign, which has encouraged supporters to attend, and Lotter said the campaign would not require wearing face coverings.

Oklahoma has seen a recent spike in coronavirus cases, setting a daily high on Thursday of 450. Health officials on Friday reported 125 new confirmed cases of COVID-19 in Tulsa County, which is the most of any county in Oklahoma. Statewide, there were 352 new cases and one new coronavirus death reported Friday, raising the state's total number of confirmed cases since the pandemic began to 9,706 and its death toll to 367.

The actual number of people who have contracted the virus is likely higher because many people have not been tested and studies suggest that people can be infected but not feel sick.

For most people, the coronavirus causes mild or moderate symptoms that clear up within weeks. But for others, especially older adults and people with existing health problems, the highly contagious virus can cause severe symptoms and be fatal.
Report a correction or typo
Related topics:
politicsoklahomacoronavirusu.s. & worldrallypresident donald trump
Copyright © 2020 by The Associated Press. All Rights Reserved.
RALLY 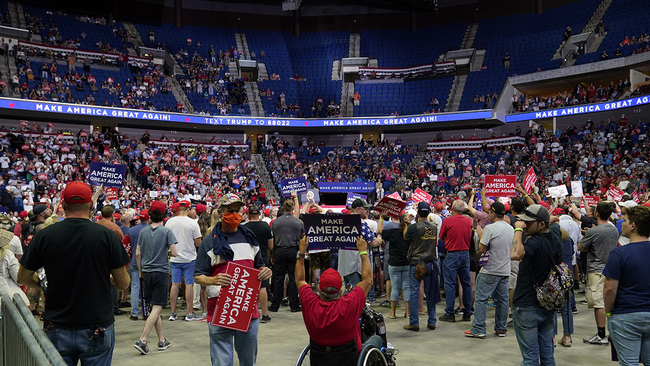 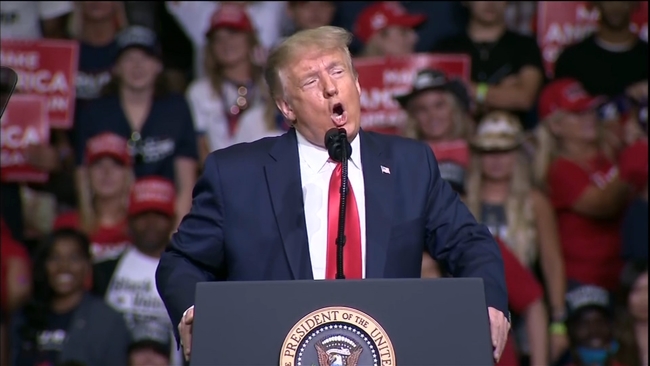 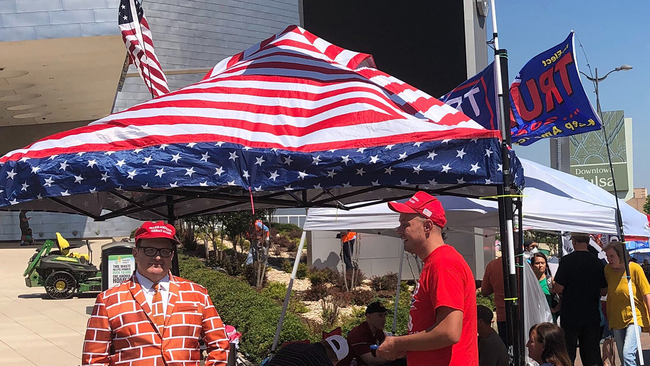