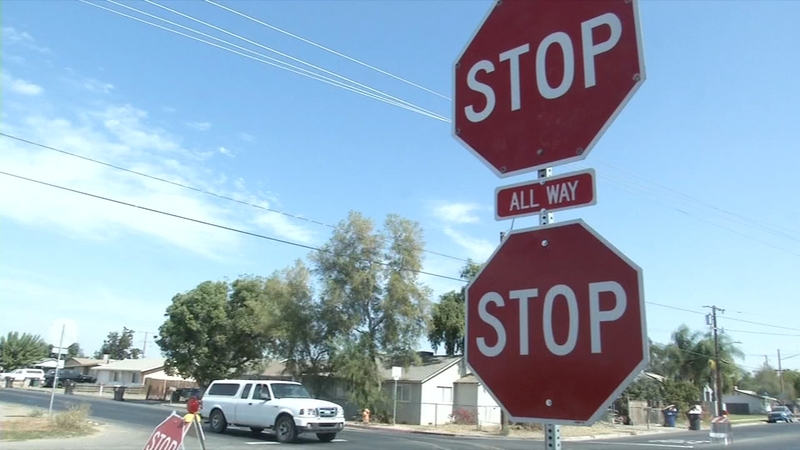 TULARE, Calif. (KFSN) -- Up until recently, six intersections along King Avenue in West Tulare had no stop signs-making them confusing and even dangerous for drivers.

"Some people don't even slow down," said Charles Frausto. "They just keep on going. And they're not going five to ten miles an hour, they're doing like 20 or 25, 30 miles an hour."

But last month, Tulare city councilmembers approved one way stop control at those intersections-some on the north and south sides, others on the east and west approaches.

The decision came after a Clovis engineering company performed a study that said: "...it is recommended that the City consider installing STOP signs on the minor street approaches to the intersections to clarify the assignment of right of way."

But the original request came from a member of the public-who asked for a stop sign at King and Los Angeles.

"These initial stop signs were brought forward by citizens who came to city hall, who shared their concerns," said Tulare Mayor Jose Sigala. "And I think it's an important example of how if citizens get involved and engaged, they can make things happen in their neighborhood."

Council members also approved a recommendation to make the intersection of Bardsley and West an all-way stop after a citizen's request.

Before, it only had stop signs on the north and south approaches, and Isamar Gomez says there were too many accidents.

Cars have damaged her fence multiple times, and even crashed into the side of her house.

Action News asked her if she feels safer living there now.

"Yeah because I used to not let my son sleep in his room because it's the corner room," she said. "So now I'm ok, even though his bed is like on the other side. I would never let him sleep there. So now I'm starting to feel a little bit better."