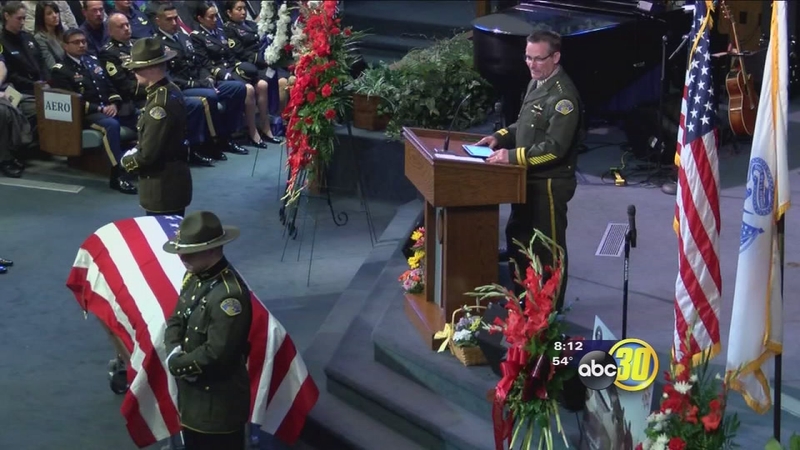 FRESNO, Calif. (KFSN) -- Loved ones said goodbye to a Tulare County Sheriff's pilot Saturday who died in the line of duty.

The funeral took place in Hanford before a graveside service in Armona to honor James Chavez who was killed in a plane crash near Porterville on February 10. The motorcade for Chavez stretched for miles, passing dozens of people who stepped out to remember the man killed along with deputy Scott Ballantyne.

The two had just finished helping deputies on the ground arrest a man when their plane crashed.

As Chavez's casket was carried inside his church, family and friends stood to pay their final respects. Becky Coral was one of them. She knew the fallen pilot for two years. "He was just a magnificent man," Coral said. "Nothing was too small for him to do, and he was always passionate about what he did."

That passion was expressed in the service when Tulare County Sheriff Mike Boudreaux recounted a time he saw it in Chavez's eyes. "I remember looking into his eyes thinking does he really love this job?" Boudreaux asked. "There was no doubt in my mind that man loved this job and he loved chasing bad guys."

Chavez's wife wrote in a tribute letter that was read aloud that is something she's realized even more since her husband has been gone. "I always knew you were an amazing man and now I'm finding out everyone who knew you thinks the same thing," his wife recounted.