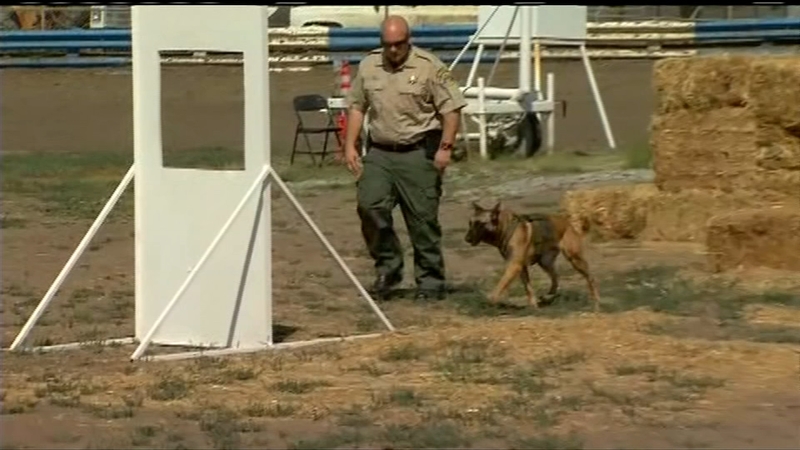 FRESNO, Calif. (KFSN) -- Tulare Police are mourning the loss of one of their own after a Sunday night traffic stop escalated to a shootout.

Though early in his career, Bane took a bullet that Interim Police Chief Matt Machado says is likely what saved his officer's life.

"It was an intense bond, and I believe the two had all the potential in the world to do great things," Machado said.

Sergeant Jon Hamlin told us by phone, Bane's handler, who's recovering from two gunshot wounds, wishes he had the chance to say goodbye to his partner.

"The handler and everyone else is upset we didn't get a chance to explain to him that that was his job and he did a good job," said Sgt. Hamlin.

The pair had just completed a 5-week training course.

Bane specialized in bomb detection, and the crime-fighting team was scheduled to get certified in explosives.

"It was really amazing to see how they work and the energy they bring and you know the bond with them for sure they become part of the family you see them day in and day out when you come into work," Sgt. Hamlin said.

Purchasing the dogs and training them costs departments anywhere from 10 to 20 thousand dollars.

That cost rises as their training and standard of health need to be maintained.

"A police K-9 can search an area faster than an officer. They can sniff that person out. It affords us the ability to be safer, faster and efficient," Lt. Alvarez said.

While protection, suspect-apprehension and explosives and narcotic detection top the list of their roles at the department, they also aid in community outreach.

"They are amazingly loyal, friendly and loving. Not only do they protect us, they open doors within the community to talk and generate different discussions as well," Lt. Alvarez said.