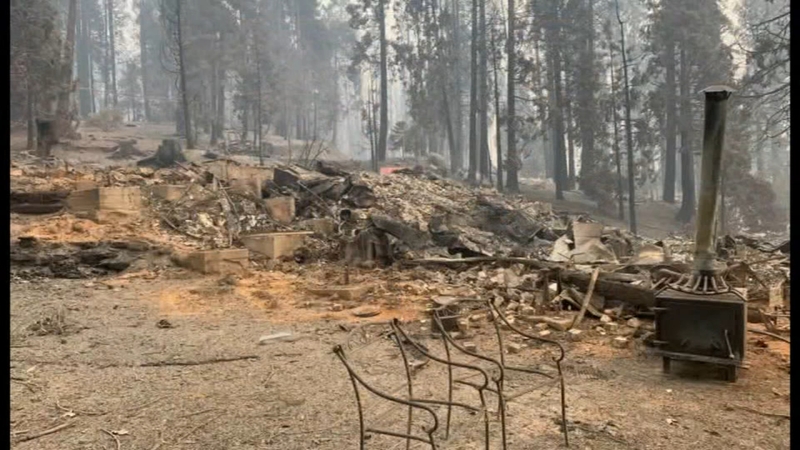 FRESNO, Calif. (KFSN) -- The small Tulare County mountain towns that sit along Highway 190 were already familiar to Virginia Carlborg and her husband.

But when they bought a home in Alpine Village this spring, they were officially leaving their life in the Los Angeles area behind.

They hoped their humble new abode would protect them from an increasingly chaotic world, including the threat of COVID-19.

"We wanted to spend the rest of our days right there," Virginia said.

When a mandatory evacuation was issued for Alpine Village, Virginia and her husband stayed behind.

They helped firefighters clear fuels, and even watered their neighbors' woodpiles.

At the insistence of sheriff's deputies, they finally left.

"The fire was so intense that there isn't anything left like around our cabin," Virginia said. "There's not even any wood ash. It just vaporized."

While staying at her daughter's house, Virginia has been trying to find out more about what kind of help she might receive once the smoke has settled.

But it has not been added to the list of California counties that have been approved for individual disaster assistance or public assistance under the presidential major disaster declaration.

But before a decision can be made, he says damage assessments must be completed.

"It is a process and we're working as quickly and safely as we can through that process to try to get Cal OES all the data it needs to hopefully pursue that assistance for both individuals and public," Britt said.

For Virginia and her husband, it would be a valuable resource on the road to recovery.

When the fire destroyed their home, they had been trying to get fire insurance but weren't yet covered.

No matter what happens, she says they will return to the mountains again, and live out their retirement dreams.

"That's a light at the end of the tunnel," Virginia said. "(It) is really what helps you to not just fall apart is to think about possibly being able to rebuild. Getting assistance from the state and feds would make that happen, for sure."
Report a correction or typo
Related topics:
tulare countyevacuationwildfirefire rescuestate of emergency
Copyright © 2021 KFSN-TV. All Rights Reserved.
More Videos
From CNN Newsource affiliates
TOP STORIES