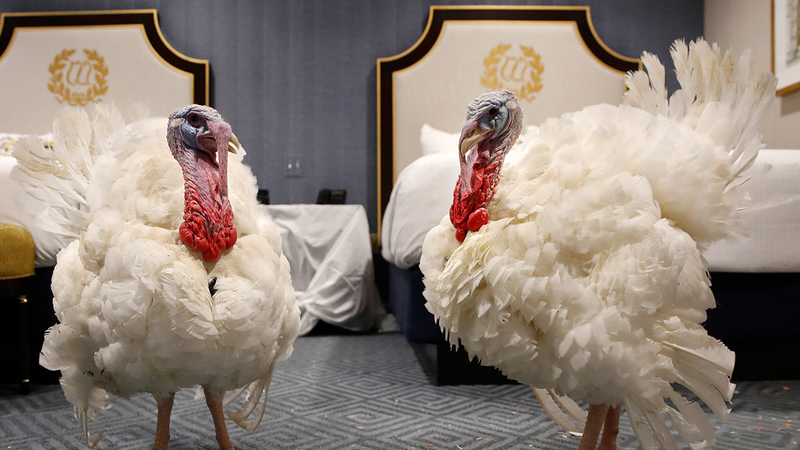 The public chose Peas the turkey over his alternate Carrots to be this year's National Thanksgiving Turkey.

Which turkey should be pardoned during the National Thanksgiving Turkey Pardoning Ceremony?

After the pardoning, Peas and Carrots will live at Virginia Tech’s “Gobblers Rest” exhibit.

The White House also posted "biographies" for each of the birds.

After the ceremony, Peas and Carrots, who both hail from South Dakota, were sent to their new home at Virginia Tech's "Gobblers Rest" exhibit where the public can visit them.

Where does the turkey pardon ceremony come from? Here's that and more fun facts about the tradition.

How did the tradition start?

Presidents have been presented with turkeys as gifts as a symbol of good cheer for many years, but it was only recently that it became an official, regular tradition to "pardon" the turkey every year to keep it off the dinner plate.

President Abraham Lincoln is believed to have granted a turkey clemency at Christmas in 1863 after Lincoln's son pleaded for the turkey's life.

After that, the tradition of sending gifted turkeys to a farm was only "sporadic," according to the White House, while other turkeys may have been eaten.

With animal rights activists picketing nearby, President George H.W. Bush made clear what would happen to his turkey in 1989, saying:

"He will not end up on anyone's dinner table, not this guy -- he's granted a Presidential pardon as of right now -- and allow him to live out his days on a children's farm not far from here."

Since then, every president has officially pardoned the turkey as part of the ceremony.

How do they pick the turkeys?

A team from the National Turkey Federation, the official supplier of the ceremony's turkeys, picks the turkeys. From a flock of about 20, they look for the two best suited for the job by demonstrating showmanship, character and a lack of stage fright, according to ABC News.

The National Turkey Federation began presenting the president with the official National Thanksgiving Turkey in 1947, under President Harry S. Truman.

What happens to the turkeys next?

The turkeys are sent to a farm where they live out the rest of their lives. Like the turkeys from last year, Peas and Carrots will go to Gobbler's Rest at Virginia Tech.

The turkeys are only expected to live another year or so. Though turkeys can live up to about four years, the official presidential pardon turkeys have only lived to age 2 at most, according to ABC News. On the other hand, domestic turkeys bred to be eaten are often taken to processing plants at age 14 to 20 weeks.
Report a correction or typo
Related topics:
pets & animalsdonald trumpholidaythe white housethanksgivinghistorypresident donald trump
Copyright © 2022 KFSN-TV. All Rights Reserved.
HOLIDAY
Valentine's Day candy conversation hearts get a sweet update
Ja Rule, Ashanti among performers for 'New Year's Rockin' Eve'
What to do if you were exposed to COVID at holiday gathering
Snow complicates travel as families head to the mountains
TOP STORIES
Le Grand woman accused of killing children makes 1st court appearance
Mayor Jerry Dyer responds to One Fresno Foundation allegations
Omicron surge in Central CA continues despite slowdown in other areas
Deputies investigating series of armed robberies in Tulare County
Garbage truck goes up in flames in northeast Fresno
1 stabbed during altercation in central Fresno
39-year-old man shot in Visalia, police investigating
Show More
Supreme Court Justice Stephen Breyer to retire
Sierra Kings Health Care District celebrates 60 years of service
Good Sports: Homeschooled Valley soccer star to play at Pepperdine
North Valley nursing program offered to Atwater High School seniors
Fed plans to raise rates as soon as March to cool inflation
More TOP STORIES News