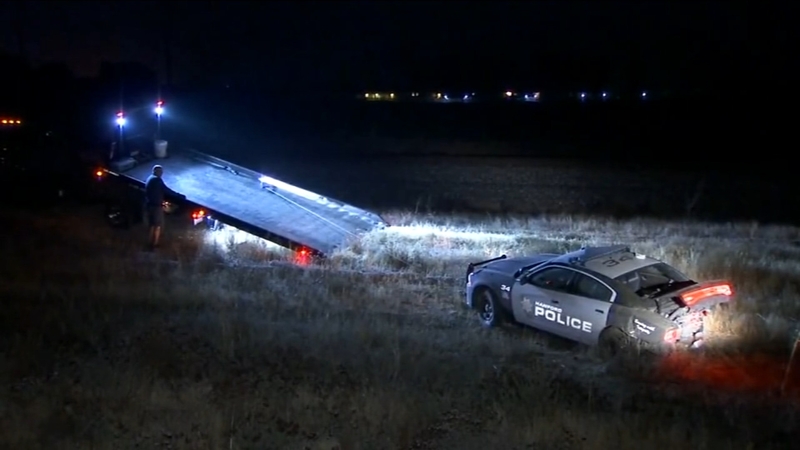 HANFORD, Calif. (KFSN) -- Two Hanford Police Officers are expected to be OK after crashing their patrol cars into each other during a high-speed pursuit Thursday night.

Hanford P.D. says it will review the pursuit and its policies as it usually does with critical incidents.

Captain Karl Anderson says what happened Thursday night wasn't the outcome they would have liked but believed this is a learning experience.

At around 8:30 pm, two patrol units were dispatched to a theft in progress at the Walmart off 12th Avenue.

As officers arrived, they spotted the suspect leaving the parking lot in his car.

They turned on their lights and sirens, but the suspect, who has since been identified as 29-year-old Travell Hill, didn't stop and led police onto Highway 198 headed east.

Hanford Police Captain Karl Anderson says the officers had information Hill may have been wanted for other crimes.

"The officers are trying to use their best judgment in a very high stress quickly evolving situation trying to make the best decisions they can with very limited information," said Captain Anderson.

Speeds topped 100 miles per hour, and the pursuit eventually transitioned onto highway 99 where once officer rear-ended the other officer's car after it slowed to avoid a crash with another driver.

Police say Hill kept going, but lost control and crashed his car into a wall about a mile away.

A third Hanford officer showed up to arrest Hill, who authorities determined had stolen a couple cases of Red Bull.

"Ideally we show up, somebody stole something, we say excuse me, sir you stole something, can we please have that back? We go through the process, we identify him, we interview him, and we move along. And 99.9% of the time, that's how all of these situations end up," said Captain Anderson.

Anderson says the department doesn't have many pursuits.

Yes, they're inherently dangerous, but this one wasn't out of the ordinary until the end.

The officers and suspect got banged up, and the patrol cars took a beating that may be beyond repair.