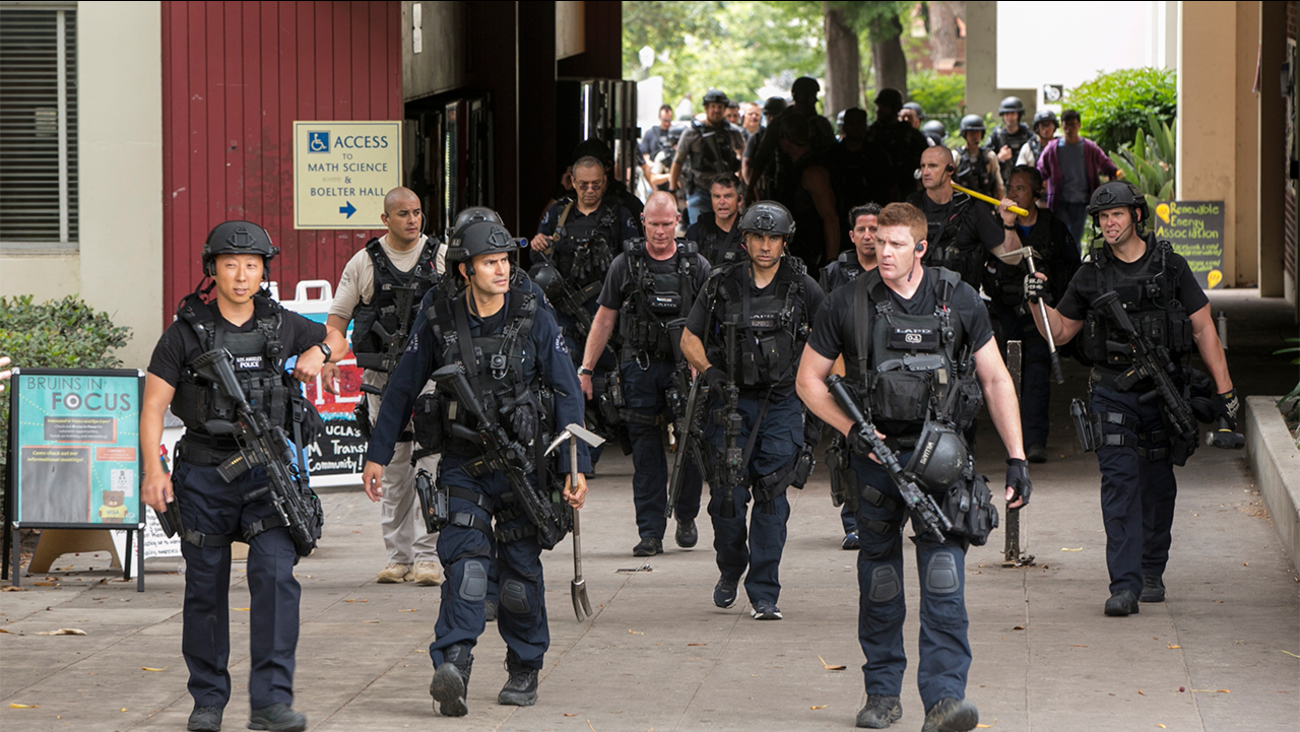 Los Angeles Police officers walk by the Mathematical Sciences Building on the UCLA campus after a fatal shooting at the University of California, Los Angeles. (Damian Dovarganes)

LOS ANGELES -- The man who carried out a murder-suicide at UCLA left a "kill list" at his Minnesota home that led authorities to find a woman's dead body, the Los Angeles police chief said Thursday.

When authorities searched Sarkar's home in Minnesota, they found a "kill list" with the names of Klug, another UCLA professor and a woman, Beck said.

He said the woman was found shot dead in her home in a nearby Minnesota town. The other professor on the list is alright.

Beck says it appears mental issues were involved and says Sarkar's dispute with Klug appears to be tied to Sarkar thinking the professor released intellectual property that harmed Sarkar.

Police are asking the public's help to find the car Sarkar drove to Los Angeles, a 2003 Nissan Sentra with the license plate of 720KTW.

Police earlier Thursday identified Sarkar as the man they say carried out the murder-suicide that took the life of Klug, a UCLA professor of mechanical engineering.

Sarkar is listed on a UCLA website as a member of a computational biomechanics research group run by the victim, a professor of biomechanical engineering.

The shooting Wednesday brought a massive police response and widespread fear of an active shooter among tens of thousands of people at the university. Fear then shifted to sadness as many lamented the death of a professor who worked on computer models of the human heart who was also a doting father who coached his young son's baseball team.

Klug was gunned down in an engineering building office, according to a law enforcement official with knowledge of the investigation but not authorized to publicly discuss it.

Finding the gunman's motive in killing Klug will be foremost in the investigation as it continues Thursday.

Classes at the University of California, Los Angeles campus will resume Thursday for most of the school, and on Monday for the engineering department, whose students and faculty were coming to grips with his loss.

"Bill was an absolutely wonderful man, just the nicest guy you would ever want to meet," said a collaborator, UCLA Professor Alan Garfinkel. "Devoted family man, superb mentor and teacher to so many students. He was my close colleague and friend. Our research together was to build a computer model of the heart, a 50 million variable 'virtual heart' that could be used to test drugs."

Peter Gianusso, who headed the El Segundo Little League where Klug coached, said he "exemplified what Little League was all about: character, courage and loyalty."

"He had a special relationship with his son through baseball, was a great coach, spent countless hours on the field with the boys and girls of El Segundo Little League," Gianusso said.