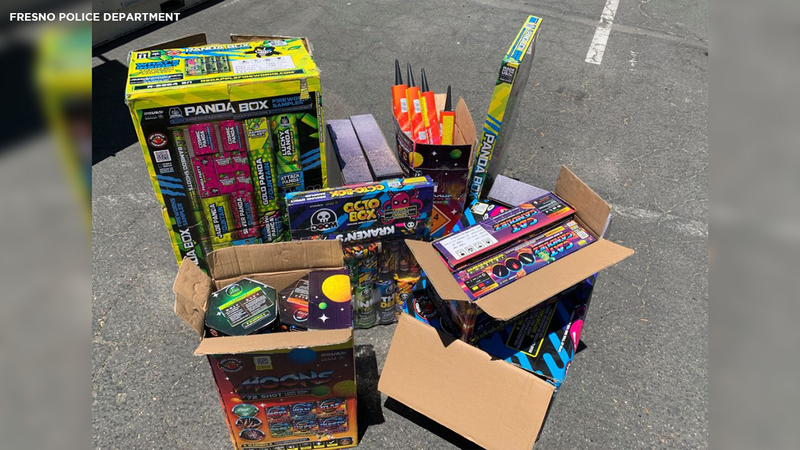 FRESNO, Calif. (KFSN) -- Within hours of announcing a joint task force to crack down on illegal fireworks, Fresno Fire and Police announced an undercover operation took 400 pounds of illegal fireworks off the streets.

Action News was given an exclusive look at what was seized.

The storage facility has more than 600 pounds of illegal fireworks seized within Fresno city limits over the last week, 100 more than what was seized in all of 2020's undercover operations.

The City of Fresno Police and Fire departments have teamed up to tackle the problem. Efforts are not just boots on the ground responding to aerials. Undercover operations are cracking down on sellers using social media.

Brown says, "A lot of these criminals selling this stuff are advertising to children. One of the prevalent ones is a controller for sale. Just one of these going up in the air dropping sparks, embers all over the directions in the neighborhood can potentially light multiple fires at the same time."

Brown says this is only a fraction of what they hope to take off the streets before they're fired off.

"We have to find a way to de-incentivize that kind of criminal behavior," said Brown.

Deputy Chief Ted Semonious says, "It's not just the responsibility of the fire department or police to solve the problem. The community has to come together as one and say we're not going to tolerate illegal fireworks."

The department receives an average of more than 120 calls to service per day, so they plan to add additional staff for the holiday weekend.

"Add to that the potential for us to run 150 additional calls based on firework calls in one day, it really stretches our resources thin," said Semonious.

Two men were cited in separate operations for a combined 400 pounds of illegal fireworks. Each was given $1,250 citations and one was arrested for illegal possession of a firearm.

Anyone in possession of more than 250 pounds of illegal fireworks faces a felony arrest.