Dems take control of the House: What it means for President Trump 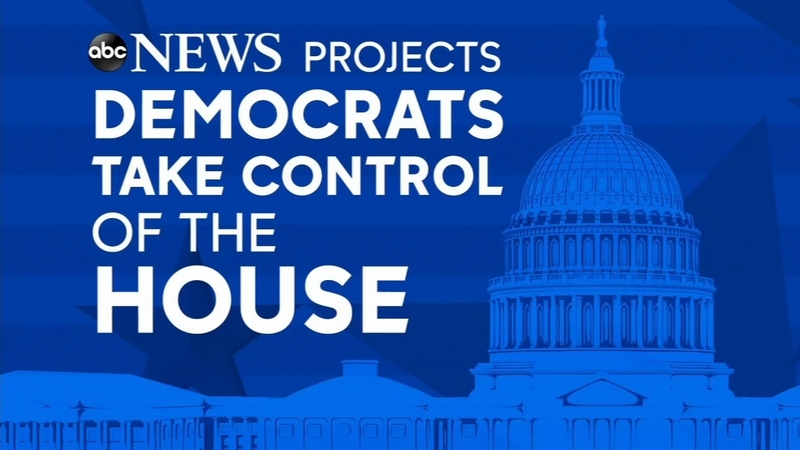 Democrats take control of the House

WASHINGTON -- President Donald Trump will wake up to a different Washington when Democrats formally take control of the House of Representatives on Jan. 3, as a tectonic shift in power will begin to unleash a succession of new legal and political challenges for his administration.

"I want to look at all the things the president has done that go against the mandates of our Founding Fathers in the Constitution," said Rep. Elijah Cummings, the Maryland Democrat who is poised to take control of the powerful House Oversight Committee. "We need accountability, transparency, integrity, and honesty from this Administration."

Democrats swept to power, having campaigned on the promise of providing a stronger check on the Trump administration. That pledge could initiate bruising legal battles over congressional subpoenas, a stack of demands for documents and testimony from federal agencies -- including Trump's tax returns -- and withering investigations into facets of Trump's personal life, his family business, and his government.

Cummings' committee has already compiled a list of 64 subpoenas and inquiries looking into concerns they had with Trump administration activities but were denied by the committee's Republican leadership. The Democrats said they intend to revisit the requests.

Practically speaking, the Democrats will be well positioned to pursue their oversight agenda. The budget for the majority will enable committee leaders to hire a small army of investigators, lawyers, and other key staffers. Lawyers began contacting senior Hill aides months ago to discuss potential job openings, according to sources familiar with the informal conversations.

The power of the majority will also enable Democrats to issue subpoenas, and demand records and testimony from federal officials. Notable among those powers: the ability to ask the Internal Revenue Service to turn over Trump's confidential tax records for their review.

Rep. Bill Pascrell, a New Jersey Democrat, is one of several committee members who told ABC News last month that the House Ways and Means Committee plans to exercise that power and initiate a review of Trump's tax filings.

"We will recommend a thorough review on a non-partisan basis, something I began asking for 18 months ago," Pascrell said. "We are allowed to investigate this. Nothing should step in our way."

Democrats on the House Intelligence Committee have been frustrated by Republicans' decision to focus their investigation into Russian election interference on the conduct of the FBI, rather than any possible ties between the Trump campaign and Russia. They now say they intend to seek testimony from more than 30 witnesses -- including Trump family members and confidants -- to address lingering questions they have about the Trump campaign's activities.

"We will take our oversight responsibilities seriously, both with respect to the intelligence agencies under our charge but also with respect to any work left undone in the Russia probe by the majority," Rep. Adam Schiff, D-Calif., the top Democrat on the House Intelligence Committee, said in a statement to ABC News ahead of the election.

They want to review, among other items, what they have called "credible" allegations about the use of Trump properties by Russian oligarchs to launder money -- allegations that Trump aides have refuted. The effort could involve hiring investigators with specialized data and forensic accounting experience, according to a congressional source. Trump has denied doing business in Russia, apart from the Miss Universe pageant.

Democrats also want to continue investigating Trump campaign's digital operation and relationship with the data firm Cambridge Analytica. The company, which shut down in May, is still being investigated by British authorities for alleged improper use of Facebook user data.
For months, Republicans have predicted that Democrats would overstep if they took control.

Democrats "have proven beyond any doubt that their sole aim is to run an endless investigation against the administration in hopes of pinning some imaginary horrific crime on them," Jack Langer, a spokesman for House Intelligence Committee Chairman Devin Nunes, told ABC News ahead of the election.

Regarding Trump's tax returns, Republicans have said they plan to put up a fight. In October, Ways and Means Chairman Kevin Brady, a Texas Republican, responded on Twitter to statements from Democrats suggesting they would pursue copies of the returns.

"This is dangerous," Brady wrote. "Once Democrats abuse this law to make public @realDonaldTrump tax returns, what stops them from prying/making public YOUR tax returns for political reasons? Who is next? #AbuseOfPower #EnemiesList"

Just this week, Trump told reporters he doesn't care if Congress looks at his returns. "I don't care. They can do whatever they want and I can do whatever I want," Trump said on a campaign stop in Indiana.

Some Trump allies warn that the Democrats' plans could stop the president's agenda in its tracks, and bog down the administration in endless oversight hearings.

"Everyone has to assume if Nancy Pelosi becomes speaker that every committee will hold hearings and bring every single Trump appointee in under oath," former House speaker Newt Gingrich, a Trump ally, told ABC News. "It would be an enormous drain on time away from policies they'd like to pursue."

Concern that overreach could spark a backlash has brought expressions of concern from Democrats as well.

Cummings has vowed he would not lose sight of kitchen table issues including prescription drug prices, postal reform and student debt.

"I'm not looking for retribution, life is too short," said Cummings, who battled with Republicans over investigations into the 2012 Benghazi attack and Hillary Clinton's use of a private email server. "While we are dealing with whatever may come in the storm of Trump, I have to keep in mind that there are people who have to live day to day."

Another House Democratic source told ABC News that there are broad concerns Democrats could spread themselves too thin investigating the administration and president, and some argue they should limit their work to a handful of inquiries and issues to maximize attention and deflect likely criticism from Republicans of overreach.
As the new Congress gets underway, the White House that is already grappling with Mueller's probe and has begun bracing for the fresh investigative onslaught.

"It's not going to be enough to go on Twitter and say, 'This is a witch hunt!' and not cooperate," Kurt Bardella, a public relations consultant who served as an aide to former House Oversight Committee chairman Rep. Darrell Issa, R-Calif., told ABC News.

The White House did not respond to questions about concerns with potential investigations from a Democrat-led House.

Democrats have taken caution not to bandy about one word that excites passions on both sides of the aisle: impeachment. But the man who would be positioned to oversee any movement to try to remove Trump from office, the expected Judiciary Committee Chairman Jerry Nadler, D-N.Y., was spotted earlier this year on the Amtrak Acela reading a stack of books on the topic.

"They will start doing everything in their power to oppose, resist, impeach, obstruct this president," Rep. Lee Zeldin, R-N.Y., a Trump ally, said in an interview with ABC News.

While progressives have tried to force votes on articles of impeachment against Trump, senior Democrats, including Schiff, House Minority Leader Pelosi and Nadler, have all said they want to see the results of special counsel Robert Mueller's investigation before giving any thought to potential impeachment proceedings. Pelosi, in particular, has been resistant to talk of any drastic measures.

In an interview with Rolling Stone this summer, she said impeachment was, in her view, "off the table."

"I don't think it's in the interest of America's working families to focus on that, unless we have more to go on, which we don't at this time," Pelosi told the magazine. "You get the power of subpoena, you don't know where it takes you. I wouldn't not impeach the president for political reasons. But I wouldn't impeach him for political reasons, either. That's just not what it's supposed to be about. I think it's not unifying for the country."