US says some remains of sailors found on USS John McCain 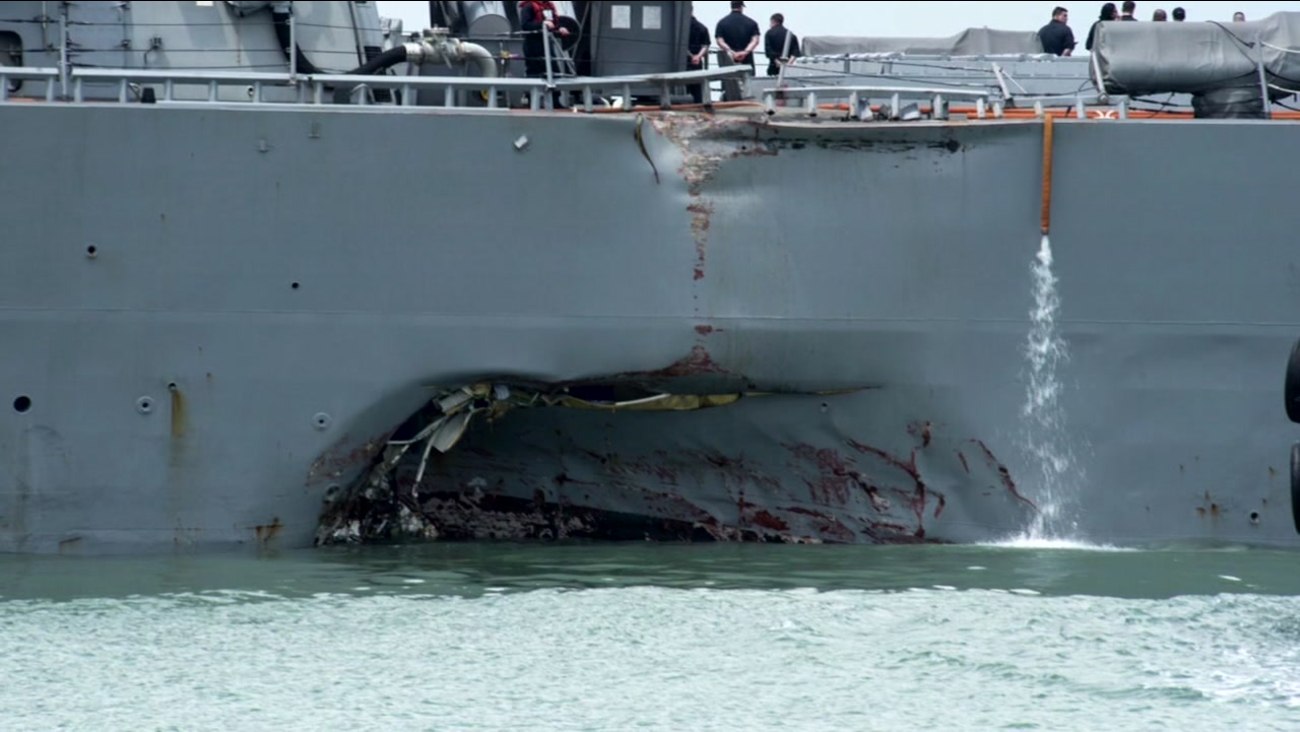 SINGAPORE -- The commander of the U.S. Pacific Fleet said some remains of Navy sailors were found in a compartment of the USS John McCain on Tuesday, a day after the warship's collision with an oil tanker in Southeast Asian waters left 10 sailors missing.

Adm. Scott Swift also said at a news conference in Singapore that Malaysian officials had found one body, which they were in the process of identifying.

The focus of the search for the missing sailors shifted Tuesday to the damaged destroyer's flooded compartments. The collision on Monday tore a gaping hole in the McCain's left rear hull and flooded adjacent compartments including crew berths and machinery and communication rooms. Five sailors were injured.

"The divers were able to locate some remains in those sealed compartments during their search today," Swift said.

"We will continue the search and rescue operations until the probability of discovering sailors is exhausted," he said.

It was the second major collision in two months involving the Pacific-based 7th Fleet and the Navy has ordered a broad investigation into its performance and readiness. Seven sailors died in June when the USS Fitzgerald and a container ship collided in waters off Japan. There were two lesser-known incidents in the first half of the year. In January, the USS Antietam guided missile cruiser ran aground near Yokosuka base, the home port of the 7th Fleet, and in May another cruiser, the USS Lake Champlain from the Navy's 3rd Fleet, had a minor collision with a South Korean fishing boat.

"While each of these four incidents is unique, they cannot be viewed in isolation," Swift said.

He said the Navy would conduct an investigation "to find out if there is a common cause ... and if so, how do we solve that."

Earlier Tuesday, the 7th Fleet said the sea search by aircraft and ships from the U.S., Singapore and Malaysian navies would continue east of Singapore where the McCain and the tanker collided at daybreak Monday, but the deployment of divers to search inside the warship, now docked at Singapore's naval base, was a blow to families still hoping for a miracle.

Megan Partlow of Ohio, who said her fiance was on board the McCain, told The Associated Press in a Facebook message that they last communicated on Sunday and she was losing hope of seeing him again.

"My last text to him was 'be safe,' which is the same way we end every conversation. I'm just ready for answers," she said. The identities of the missing have not been disclosed but Partlow said her fiance's parents were in touch with the Navy's family assistance center.

Navy Adm. John Richardson, the chief of naval operations, on Monday ordered a pause in 7th Fleet operations for the next few days to allow commanders to get together with leaders, sailors and command officials and identify any immediate steps that need to be taken to ensure safety.

A broader U.S. Navy review will look at the 7th Fleet's performance, including personnel, navigation capabilities, maintenance, equipment, surface warfare training, munitions, certifications and how sailors move through their careers. Richardson said the review will be conducted with the help of the Navy's office of the inspector general, the safety center and private companies that make equipment used by sailors.

The McCain had been heading to Singapore on a routine port visit after conducting a sensitive freedom-of-navigation operation last week by sailing near one of China's man-made islands in the South China Sea.

China, Washington's main rival for influence in the Asia-Pacific, seized on the McCain collision to accuse the Navy of endangering maritime navigation in the region. This year's string of accidents shows the U.S. Navy "is becoming a dangerous obstacle in Asian waters," the official China Daily newspaper said in its online edition.

The McCain and the Alnic MC oil tanker collided about 4.5 nautical miles (8.3 kilometers) from Malaysia's coast at the start of a designated sea lane for ships sailing into the busy Singapore Strait.

There was no immediate explanation for the collision. Singapore, at the southern tip of the Malay Peninsula, is one of the world's busiest ports and a U.S. ally, with its naval base regularly visited by American warships.

The Singapore government said no crew were injured on the Liberian-flagged Alnic, which sustained damage to a compartment at the starboard, or right, side at the front of the ship some 7 meters (23 feet) above its waterline. The ship had a partial load of fuel oil, according to the Greek owner of the tanker, Stealth Maritime Corp. S.A., but no apparent spill.

Several safety violations were recorded for the oil tanker at its last port inspection in July, one fire safety deficiency and two safety-of-navigation problems. The official database for ports in Asia doesn't go into details and the problems apparently were not serious enough for the tanker to be detained.