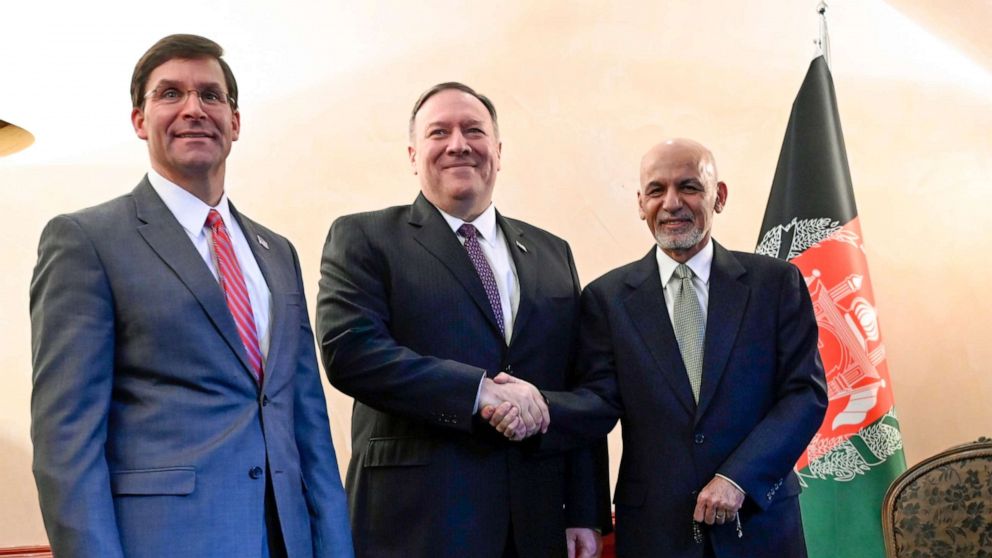 ABCNews
By CONOR FINNEGAN
The United States and Taliban reached an agreement on Friday to reduce violence for seven days, which could open the door to the two sides signing a larger peace deal reached last year, according to a senior State Department official.

That larger deal would require U.S. forces to begin to withdraw, in exchange for a Taliban commitment to not allow Afghanistan to be a safe haven for terrorism and to sit down with other Afghans for peace talks -- two commitments critics are skeptical the militant group will follow through on.

The reduction in violence had been a key U.S. demand since President Donald Trump called out negotiations last fall, but it's a step short of the complete ceasefire that the Afghan government had been calling for.

Still, after over 18 years of war, the seven-day deal could open the door to a historic agreement that ends U.S. deployment in Afghanistan, with the senior official not ruling out a complete withdrawal.

But first, the Taliban must follow through and implement the reduction in violence, according to the official.

"Should the Talibs implement what they've committed to doing, we'll go forward with the agreement," they said.

A Taliban source told ABC News the reduction would begin on Feb. 22, with plans for the two sides to sign the larger agreement on Feb. 29 and Afghan national peace talks to begin March 10.

While it's not a full ceasefire, the reduction is nationwide and includes Afghan government forces, not just the U.S. and Taliban. The language is also "very specific," the official said, including prohibiting roadside bombs, suicide bombs and rocket attacks.

The U.S. military will monitor the reduction and use a hotline directly to the militant group, as well as the Afghan government, to raise any violations or other issues.

The senior official said they expect there will be some "spoilers ... who benefit from the status quo" and will conduct attacks, but the U.S. --- led by Gen. Austin Miller, head of U.S. forces in Afghanistan -- will assess each incident individually.

"That's why this channel is so important, that if we see something, we should be able to determine, and if we can't determine, we raise questions," the official said.

It's still unclear if certain military activity will still be permissible, making this interim deal different from a complete ceasefire.

The official, who briefed reporters traveling with Secretary of State Mike Pompeo in Munich, would not go into reports of secret annexes in the larger U.S.-Taliban deal or discuss specifics, like how many U.S. troops and what kind could remain behind.

They said only the U.S. withdrawal would be "conditions-based and in phases," tied directly to the Taliban meeting its commitments.

Those commitments are to joining Afghan national peace talks and to barring terrorists from any safe haven in the country -- "no hosting, no presence, no training, no recruitment, no fundraising," the official said, which has been the top U.S. priority over 18 years after al Qaeda operatives used the country to launch the Sept. 11 attacks.

Critics remain skeptical that the militant group can fulfill that promise, but the official said the U.S. will have "monitoring and verification" to ensure they do.

The Afghan government, which the Taliban refuses to recognize, had been hoping for a permanent ceasefire first. The U.S. had initially called for a one as part of any deal, but abandoned that after the Taliban made clear they wouldn't agree to it. But the senior State Department official said a "comprehensive, permanent ceasefire to end the Afghan-Afghan war will be one of the first topics" of Afghan national peace talks.

They refused, however, to say whether the U.S. withdrawal was conditioned on those Afghan peace talks being successful, calling it a hypothetical.

Those talks will bring the Taliban together with a wide range of Afghan leaders, including government officials, but they'll be forced to attend in a "private" capacity because of the Taliban refusal to recognize the Kabul government.

A round of informal Afghan national dialogue yielded some success last July, bringing together Taliban and government officials, civil society leaders, tribal elders and some women that agreed on a somewhat vague, but inclusive resolution calling for peace.

But the senior official left the door open to the agreement ultimately ending with no U.S. troops in Afghanistan at all.

"Having a military presence in Afghanistan is not an end in itself for the United States," the official said. "What's important is whether there are conditions in Afghanistan that necessitate a presence ... and that depends on whether the Talibs deliver."
Report a correction or typo
Related topics:
abc newsnational
Copyright © 2020 ABC News Internet Ventures.
More Videos
From CNN Newsource affiliates
TOP STORIES