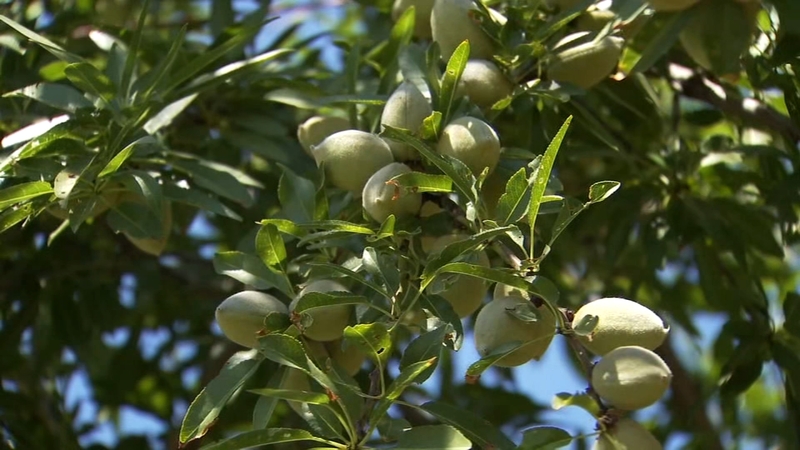 FRESNO COUNTY, Calif. (KFSN) -- Almond trees are bearing a lot of weight right now. The crop is maturing quickly in orchards all over the Valley.

It's estimated that one out of every five almonds enjoyed by consumers is grown in Fresno County.

"The crop this year looks phenomenal. If everybody would think back to February, we had the most perfect bloom that a lot of folks say in a lifetime, in a generation. There wasn't a drop of rain," says Farm Bureau CEO Ryan Jacobsen.

RELATED: Here's how almonds get harvested in the Central Valley

The result is another expected record year. In 2019, farmers produced 2.5 billion pounds of almonds.

"Looks like from all estimates we've seen, we're going to be close to a 3 billion pound crop, which is the largest crop we've ever had," says Caruthers grower Matt Efird.
Efird is also Farm Bureau Board President.

Two billion pounds were shaken from the tree in 2011.

Over the years, many farmers have been planting more nut trees.

"We've seen a shift away from the raisin industry and even some of the Central Valley wine industry and those vineyards are coming out and going into almonds. Fruit industry has also kind of consolidated," says Efird.
The pandemic caused a shipping slowdown to overseas markets.

"One of the main reasons is it is a shelf stable, portable protein source that lots of people around the world like because of that," says Jacobsen.