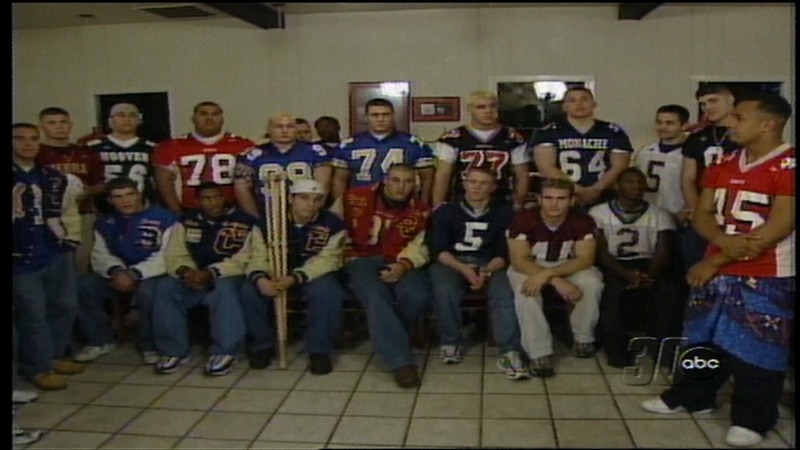 FRESNO, Calif. (KFSN) -- With Valley championships on the line next week, Action News took a look back, 20 years to be exact, at an ABC30 Me-n-Ed's All Valley High School Football Team.

Action News anchor Dale Yurong checked in on some of those now grown-up players.

The All Valley video from two decades ago brought back memories of happiness, success, but also sadness.

The team was the best the Valley had to offer in 1999.

"The All Valley Team, it was fun to see all the different players from the different schools and everybody sitting together, especially in their jerseys," former Sanger High running back Pete Hingano recalled.

Hingano shared his Tongan culture with the Sanger community and brought fans to their feet every Friday night.

Now he shares the gospel as senior pastor at Sanger Bible Church.

"I want to equip our people here to know who they are and especially that God loves them," Hingano said.

Seth Miller was a hard-hitting linebacker from Mt. Whitney in Visalia. Miller joined the U.S. Army. Sadly, he died in 2008 during a military exercise.

"He (Miller) brought kids up to a higher level himself by the way he played," said former Mt. Whitney coach Charlie Casale. "Kids looked up to him so they played better than they were."

Chris Patrick was one of our All-Valley quarterbacks. Two decades later, he is still a Clovis Cougar. Patrick succeeded his father as the school's head baseball coach.

"It feels like a long time ago, but I remember the bright Friday night lights. Nothing beats that," he said. "Just about every throw I ever made, I probably remember the bad throws more than I remember the good throws."

Blonde hair was "in" back then. Former Tulare Union running back Dominique Dorsey admitted, "We all had that Sisqo thing. Looking back at it now, it's like oh my gosh, what was I thinking but the kids are still doing it now."

The slippery Dorsey played six years in the Canadian Football League. Dominique was a great runner and talker.

Redwood High's speedy receiver Aaron Hill enjoyed a 13-year run in the major leagues and played for five different teams. Hill remembered the night he was honored with the rest of the ABC30 All-Valley team.

Our All Valley Team was head and shoulders above the rest.

Number 24 for Tulare Union would grow up to be Randy Jordan Sr. His son, Randy Jr. now plays the same position, cornerback, at Fresno State.