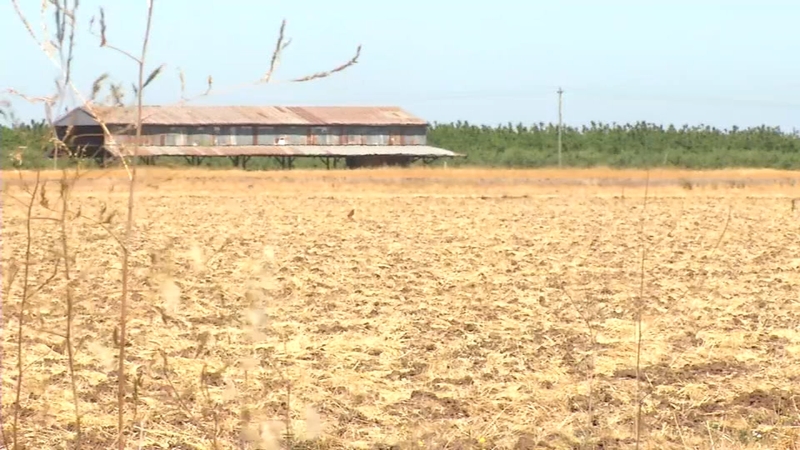 FRESNO COUNTY, Calif. (KFSN) -- The Central Valley Project announced on Wednesday that south-of-Delta customers will receive no allocation of water.

The Bureau of Reclamation says the decision was necessary because the 2021 water year for the Sacramento-San Joaquin River Basin is currently the driest since 1977.


The 0% allocation will hit Valley farmers hard. Growers dealing with a dwindling irrigation supply had plenty to say about adapting to climate change during a public session online.

Before the ruling, there was already a lot of uncertainty over how much surface water can be delivered from reservoirs through canals. That led many Valley farmers to eliminate some crop plantings this year.

Reduced allocations mean many growers will be forced to pump groundwater out of their wells to irrigate crops. That practice continued to put extreme pressure on the water table in many areas.

Helm Grower Don Cameron explained, "Sustainable Groundwater Management is already putting controls on groundwater pumping in many areas and will lead to land being permanently fallowed. We've heard anywhere from 500 to a thousand acres to a million acres."

Congressman Jim Costa (D-Fresno) hosted an online meeting to hear from growers and climate experts on how the ag community was adapting to long-term change in our average weather patterns.

Costa said, "It's complicated. It's difficult. My fear is we're going to lose some agriculture production because some of the challenges we face in the valley."

The latest Drought Monitor map showed most of the state was in red - or extreme drought. Parts of Fresno, Tulare, and Kern counties were brown - or exceptional drought.

Firebaugh farmer Joe Del Bosque said, "We gotta do more with less and that's still the theme today. It doesn't matter if you're talking about water or power or land or any resource. We have to do more with less."

Others talked about the need to step up efforts to replace diesel-powered tractors and equipment with those which run on electricity to help clean the valley air.

Congressman Costa said the concerns shared by the panelists could be used to help craft future tax incentives, or even legislation, to help farmers and agencies dealing with drought conditions.