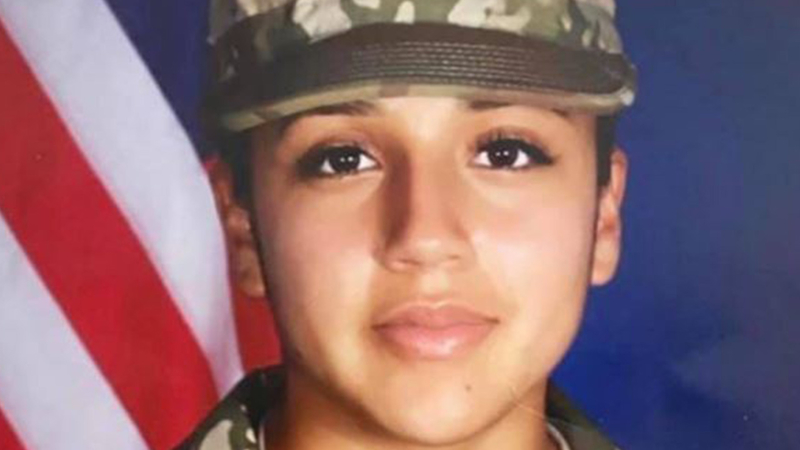 Vanessa Guillen honored with march in Houston on Saturday

The Army Criminal Investigation Division has yet to independently confirm the identification. ABC News has reached out to Army CID for comment.

Investigators believe Fort Hood soldier Vanessa Guillen, who has been missing since April, was killed by a fellow soldier from Calumet City.

Vanessa Guillen disappeared from Fort Hood, Texas back in April.

Hundreds marched to Houston's city hall on Fourth of July, demanding justice for Vanessa Guillen, a missing Texas soldier who was killed and dismembered by a fellow soldier stationed at the same Texas base, according to a criminal complaint.

ENOUGH IS ENOUGH: Hit play to hear what the family of Army soldier Vanessa Guillen said about a person of interest who committed suicide and how that may be tied to Guillen's sexual harassment allegations.

Authorities said that 20-year old Aaron David Robinson of Calumet City pulled a gun and shot himself as police were trying to make contact with him on Wednesday.

Lawyer Natalie Khawam said the U.S. Army Criminal Investigations Division told her that Robinson bludgeoned 20-year-old soldier Vanessa Guillen with a hammer at Fort Hood and later dismembered her and buried the remains in the woods.

Investigators believe Fort Hood soldier Vanessa Guillen, who has been missing since April, was killed by a fellow soldier from Calumet City, Illinois.

Khawam said she met with investigators from the U.S. Army Criminal Investigations Division on Wednesday evening and was told the other soldier cleaned up the area where Guillen was killed, placed her body in a container and wheeled her out to his car.

Guillen's family has said that she was a victim of sexual harassment prior to her disappearance, something the Army disputes.

Police said a civilian suspected of helping Robinson dispose of the Guillen's body is under arrest. Cecily Aguilar, 22, has been charged with one count of conspiracy to tamper with evidence.

Cecily Aguilar, 22, charged with one count of conspiracy to tamper with evidence.

The Army said Aguilar is the estranged wife of a former soldier who was stationed at Fort Hood.

Robinson allegedly admitted to Aguilar that he transferred the woman's body off the base to a remote site in Bell County.

Federal and military investigators say a soldier missing since April was killed by a fellow soldier stationed at the same Texas base.

According to the criminal complaint, on June 21, what appeared to be the burned remains of a plastic tote or tough box were found in an area near where Robinson's phone pinged. No remains were found that day.

According to investigators, Aguilar admitted that Robinson told her he killed a female soldier by striking her in the head with a hammer multiple times at his arms room while on post on April 22, the same day Guillen went missing.

The criminal complaint said Robinson then placed Guillen's body in a box and moved the box to a location near the Leon River.

Aguilar told officials that sometime between the evening of April 22 and the early morning of April 23, Robinson picked her up at the gas station where she worked and took her to an area near the Leon River and a bridge. A box with wheels and handles was already at the site.

Aguilar said Robinson walked her over to the woods, opened the box, and she saw a dead woman inside. Aguilar later told investigators she "recognized the deceased whom she helped Robinson mutilate and dispose of" as Guillen.

The complaint said Aguilar and Robinson then used a hatchet or ax and a machete-type knife to dismember the body. They allegedly tried to burn the body, and placed the remains in three separate holes and covered them up.

The remains were found in a shallow grave near the Leon River in Bell County.

Were there cameras near where the young soldier worked? Many have been asking. Hit play to find out what the Army said when they were asked.

She's currently being held at the Bell County jail. Her first court appearance will be in Waco.

The hearing is expected to take place early next week.