Teen vaping doubles as other drug, alcohol use falls 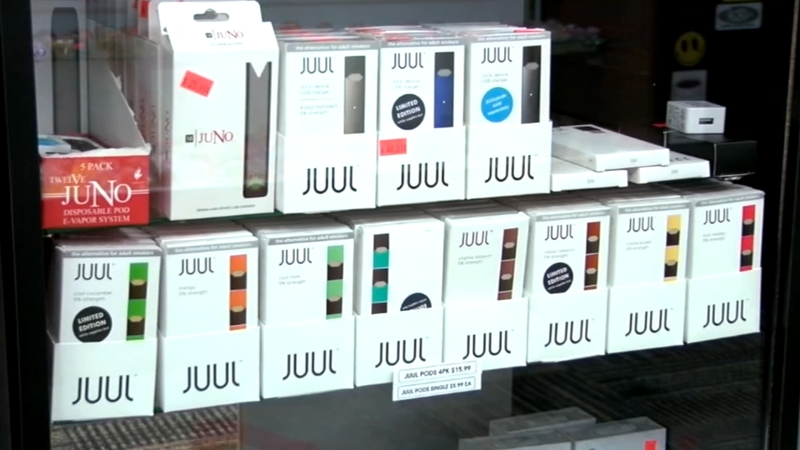 Vaping on the rise among teens

Twice as many high school students used nicotine-tinged electronic cigarettes this year compared with last year, an unprecedented jump in a large annual survey of teen smoking, drinking and drug use.

It was the largest single-year increase in the survey's 44-year history, far surpassing a mid-1970s surge in marijuana smoking.

The findings, released Monday, echo those of a government survey earlier this year. That survey also found a dramatic rise in vaping among children and prompted federal regulators to press for measures that make it harder for kids to get them.

Experts attribute the jump to newer versions of e-cigarettes, like those by Juul Labs Inc. that resemble computer flash drives and can be used discreetly.

Olivia Turman, a freshman at Cabell Midland High School in Ona, West Virginia, said she too has seen kids "hit their vape in class."

The federally funded survey released Monday is conducted by University of Michigan researchers and has been operating since 1975. This year's findings are based on responses from about 45,000 students in grades 8, 10 and 12 in schools across the country. It found 1 in 5 high school seniors reported having vaped nicotine in the previous month.

After vaping and alcohol, the most common thing teens use is marijuana, the survey found. About 1 in 4 students said they'd used marijuana at least once in the past year. It was more common in older kids - about 1 in 17 high school seniors said they use marijuana every day.

Overall, marijuana smoking is about the same level as it was the past few years. Vaping of marijuana rose, however.

More teens, however, are saying no to lots of other substances. Usage of alcohol, cigarettes, cocaine, LSD, ecstasy, heroin and opioid pills all declined.

Experts say it's not clear what's behind those trends, especially since the nation is in the midst of the deadliest drug overdose epidemic ever.

"What is it that we're doing right with teenagers that we're not doing with adults?" said Dr. Nora Volkow, director of the National Institute on Drug Abuse, a federal agency that funds the Michigan study.

One leading theory is that kids today are staying home and communicating on smartphones rather than hanging out and smoking, drinking or trying drugs.

What about vaping? "Vaping mostly is an individual activity," said David Jernigan, a Boston University researcher who tracks alcohol use.

The vaping explosion is a big worry, however. Health officials say nicotine is harmful to developing brains. Some researchers also believe vaping will make kids more likely to take up cigarettes, and perhaps later try other drugs.

So far that hasn't happened, surveys show. But the Juul phenomenon is recent, noted Richard Miech, who oversees the Michigan survey.

If vaping does lead to cigarette use among teens, that may start to show up in the survey as early as next year, he added.
Report a correction or typo
Related topics:
health & fitnessvapingteenagersu.s. & worlddrugsalcohol
Copyright © 2022 by The Associated Press. All Rights Reserved.
TOP STORIES
Loved ones grieve for Missy Hernandez at Fresno vigil
Tax filing season starts Monday. What to expect for 2022
Fresno's famous 'dancing teacher' appears on Ellen Show
5 tax changes that can boost your refund this year
Man hospitalized after shooting in northwest Fresno
Suspect opens fire at birthday party full of teenagers in Clovis
Fauci optimistic omicron will peak in February
Show More
Rescuers use sausage dangling from drone to lure runaway dog to safety
Arnold Schwarzenegger involved in multi-vehicle crash
Deputies investigating armed robbery at Tulare Co. convenience store
President Biden appoints Fresno leader to head USDA post
How a 73-year-old grandmother outwitted a scam artist
More TOP STORIES News