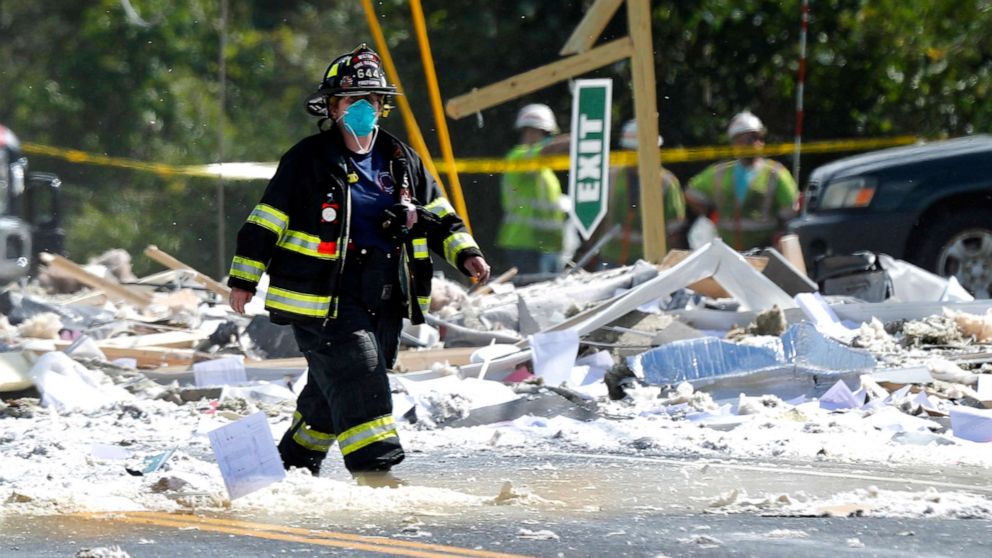 A 68-year-old Maine fire captain was killed and six people were injured from a powerful explosion at a building Monday morning, leaving a fire department in mourning, according to officials.

Farmington Fire Capt. Michael Bell, a 30-year member of the department, died while responding to reports of a propane smell at a local Farmington business, according to Maine State Police.

The building -- thecentraloffice for LEAP, a program that supports homes for developmentally disabled people -- exploded minutes after responders arrived, flattening the two-story structure, according to police.

The cause of the explosion is believed to be an accidental propane or natural gas leak, said Farmington police chief Jack Peck.

Franklin County Sheriff Scott Nichols was one of the first responders and helped moved people away from the scene, according to the police chief.

"I spent a year in Iraq, it's about the closest I can explain it. Total devastation," Nichols said. "I've never seen destruction like that in my career... It was horrible."

Five of the six injured are firefighters. Among them is Fire Chief Terry Bell, 62,the brother of fallen Capt. Michael Bell, said state police.

The sixth person injured was a maintenance worker at the facility: 60-year-old Larry Lord, said police.

Ross has been treated and released while the other five remain hospitalized to be treated for serious injuries, said police.

Residents who live in the area appear to be fine but shaken, said the sheriff.

The blast was so powerful that those in the adjoining town said they felt it, said the police chief.

"Our hearts go out to all those impacted by this tragedy, especially to the loved ones of the firefighter lost and others injured," Maine Gov. Janet Mills tweeted. "I am grateful for the work of first responders who are at the scene and urge Maine people to avoid the area."

Grieving firemen lined up outside the medical examiner's office Monday afternoon ahead of the procession to the funeral home.

The governor has directed flags to be flown at half-staff in honor of the fallen firefighter.

"Our hearts go out to anyone injured or impacted today," said officials with LEAP.

The State Fire Marshal's Office will investigate the cause and origin of the blast, said Mills, who visited the explosion site.