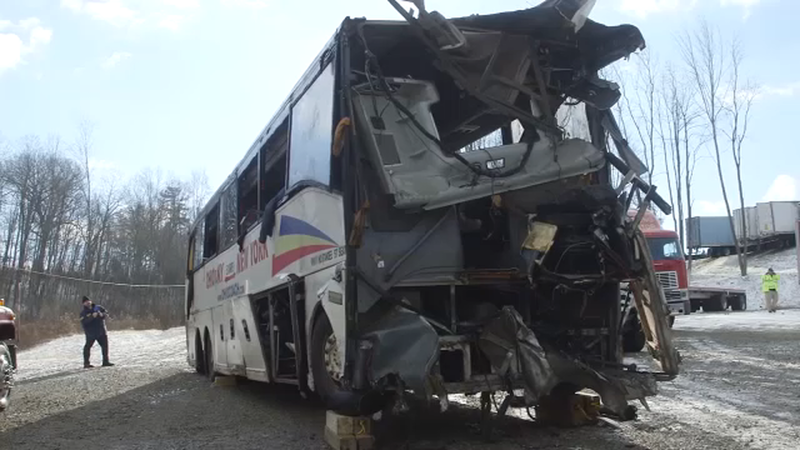 GREENSBURG, Pennsylvania -- Investigators from the National Transportation Safety Board released video showing the aftermath of a crash on the Pennsylvania Turnpike over the weekend that killed five people, including a nine-year-old girl.

The video includes drone shots showing a parking lot where a damaged tour bus and tractor-trailers were being kept.

Video from the ground showed NTSB investigators combing through the mangled vehicles.

The crash happened around 3:30 a.m. on January 5 in Mount Pleasant Township, which is about 40 miles southwest of Pittsburgh.

The NTSB investigation began shortly after the crash, and an initial report is expected in 10 days.

However, it could be two years before the crash is fully analyzed.

"I thought it was devastating," National Transportation Safety Board member Jennifer Homendy said after reviewing evidence. "I imagine that if you were in this accident, that it was scary."

She said the motor coach began its trip at 10 p.m. Saturday in Queens, New York, then stopped in Manhattan and Hackensack, New Jersey. She said driver Shuang Qing Feng, 58, was about 10 miles from being subbed out by the next driver when his bus passed a FedEx truck.

"Down the road" the driver lost control and the bus hit a concrete median barrier, went up an embankment and ended up blocking the westbound turnpike travel lanes, she said. The FedEx truck could not stop and hit the bus, after which a UPS truck also struck it.

Feng and two other victims are from New York City: passengers Eileen Zelis Aria, 35, and 9-year-old Jaremy Vazquez, according to the Westmoreland County coroner's office.