A former co-worker described Mandy's death as a punch to the gut, adding that she was a wonderful woman and mother.
KFSN
By Brian Johnson 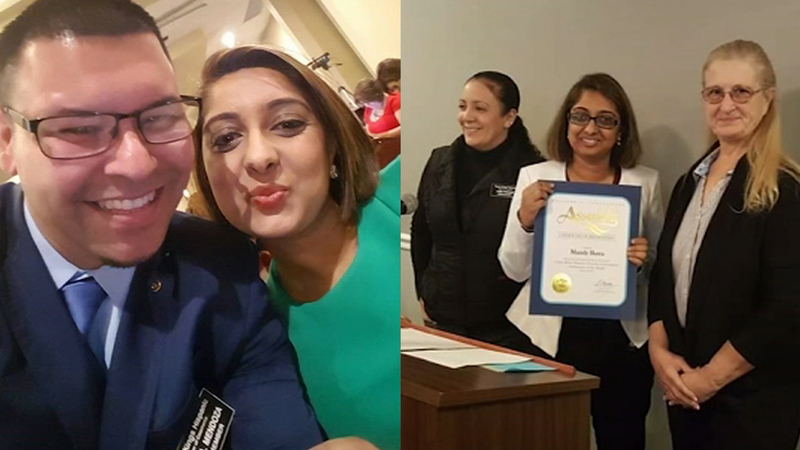 VISALIA, Calif. (KFSN) -- Visalia police have identified the suspect in a fatal stabbing on Wednesday as 22-year-old Swarndeep Basra.

They say Basra is still in custody at the hospital, receiving treatment for injuries he received during an altercation with the victim.

UPDATE: @Visaliapd identify the victim as 39-year-old Mandeep Basra and suspect as her brother-in-law 22-year-old Swarndeep Singh Basra. He is still in the hospital for injuries he received “in the original altercation with the victim.” @ABC30

Carlos Mendoza is one of the many people now mourning her loss.

He last spoke to Mandy on a Zoom call for the Tulare Kings Hispanic Chamber of Commerce.

He's the chamber's current board president.

"I still hear her asking me when can we meet up for coffee, and unfortunately I'll never have that chance to have that coffee with her," Mendoza said on Thursday.

Mendoza says Mandy excelled in her role as chamber ambassador, leading events such as ribbon cuttings and mixers.

He says she was giving, selfless, and kind.
"You could never catch her without a smile and that is key to being an ambassador with us," Mendoza said. "And she was always eager and willing to step up any time there was a volunteer opportunity any time there was a committee and event."

Mandy, who worked in the financial industry, was also involved with the Visalia Chamber of Commerce.

"The Visalia business community suffered a great loss," Visalia Chamber of Commerce CEO Gail Zurek said. "Mandy Basra was a beloved and dear friend of all who knew her. Her heart for this community was evident from her volunteering for events to helping small businesses grow. Her smile was infectious and being around her made everyone feel better. Mandy will be deeply missed."

A former co-worker described Mandy's death as a punch to the gut, adding that she was a wonderful woman and mother.

Swarndeep Basra has not been charged with a crime yet.

Police say his motive is still under investigation at this time.