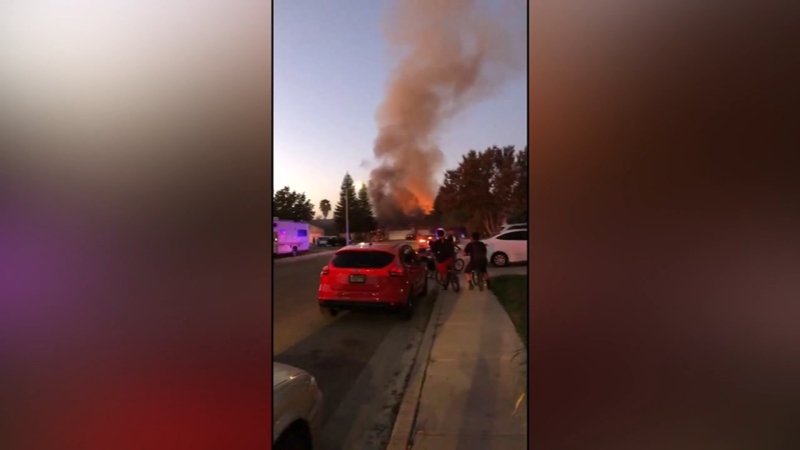 VISALIA, Calif. (KFSN) -- Kathy Demmers and her husband were watching TV in their living room Sunday evening when they heard a series of loud booms coming from outside.

Kathy's husband captured some of the scene on cellphone video and called 911.

"All of a sudden it'd just go boom, and it'd light up and boom and go light up," Kathy said. "And it was one right after another rapidly. And then all of a sudden the tree caught on fire and it just ignited. I mean it just went crazy."

It took Visalia firefighters about an hour to put the fire out.

But from there, it didn't take long for police to determine its cause-an illegal honey oil lab inside the home.

Visalia Police Sgt. Gary Williams says they found approximately 100 small butane canisters at the home and one large one.

Some of them exploded during the firefight, producing the loud popping noises heard throughout the neighborhood.

Visalia Fire officials say no one was inside when they arrived, though they did see a neighbor rescue a dog from the garage.

Sgt. Williams says officers are now working to find out who was behind the lab.

"I know that they are aware of who owns the residence and who was there at the time," Sgt. Williams said. "They're still doing additional follow up information in regards to say who was involved in the process itself."

He says the fire caused quite the commotion.

"Even people back there just riding their bikes or driving up just to see what was going on and just seeing this house just burst to flames, smoke coming out of the garage," Martinez said.

For neighbors, the fire was too close for comfort.

Its cause was also an unsettling reminder that we don't always know what's happening next door.

"It's a bit kind of shocking that there's people who are doing such things," Martinez said. "But hey, there's a lot of people who do a lot of secret stuff in their house."