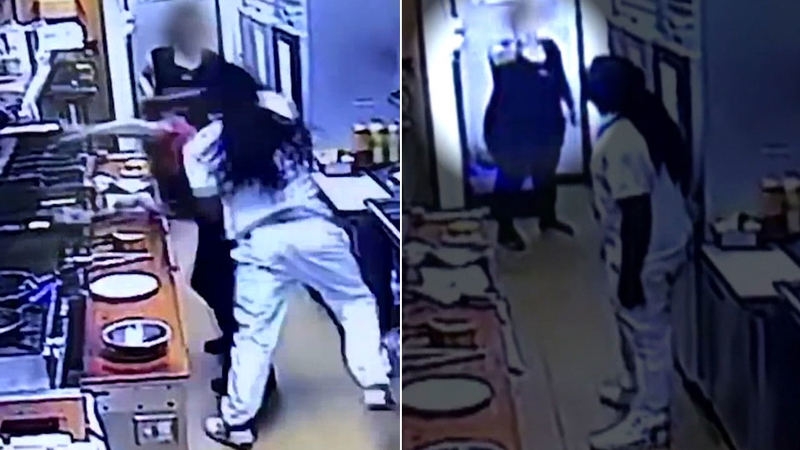 MILWAUKEE -- Dramatic surveillance video shows the moment a waitress pulled a gun from her apron and held it on a man who was attacking her co-worker.

The situation began when a regular customer became upset about how long his food was taking, the manager at George Webb restaurant in Milwaukee told WISN. He began shouting at the waitress and she asked him to leave.

The man did not leave but instead came around behind the counter. He punched his waitress in the face, which is when the co-worker jumped into action. The waitress who was attacked escaped through a doorway behind her co-worker as the co-worker pulled out a gun, stopping the man in his tracks. He continued to shout as he retreated.

The attack happened on June 29. Police know who the man is but are still looking for him, WISN reports.

Milwaukee Alderman Bob Donovan released the footage to the public in hopes of catching the suspect, ABC News reports.

"This is just sickening and I am tired of this crap happening in my district and in too many other neighborhoods across Milwaukee," he said. "One can only imagine what might have occurred if that employee had not pulled out her weapon."

The woman with the gun has a concealed weapon permit, according to Donovan's release.

The restaurant released the following statement to ABC News.