Lack of rainfall in the Valley continues to disappoint farmers 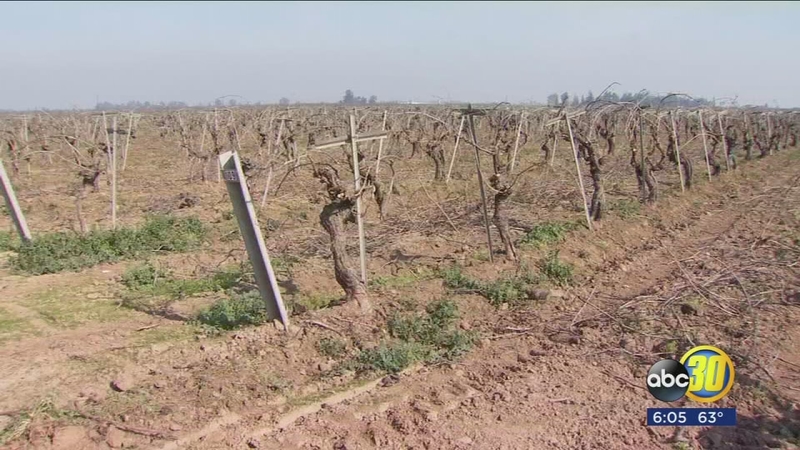 FRESNO, Calif. (KFSN) -- After one of the driest Decembers on record Valley growers had hope the month of January would be the turning point for rain to return.

Ryan Jacobsen with the Fresno County Farm Bureau says water levels on the Kings River are nothing to brag about either.

"You know the indications right now are somewhere near the 25 to 35 percentile of where we should be as far as normal. So we are way behind. The end of January helped a little but we have a lot of catching up still to do," said Jacobsen.

The lack of rain and above normal temperatures have growers concerned not just for a shortage of water deliveries this summer but also the impact of spring crops.

"With the warm weather we are expecting you will see an acceleration of crops, you will see those blooms start to push, you will start to see grapevines really start to swell. This is indicating this is going to be a really early spring unless things change here very radically," said Jacobsen.

Holding on to last year's record rain and snowpack had the Bureau of Reclamation looking ahead to 2018.

Officials say the 200 percent of normal precipitation runoff from Friant Dam is still in the bank.

"The contractors are certainly trying to conserve what they can and they are in the ballpark of around 10 percent or a little less than that of water that they didn't use last year that they are holding on," said Michael Jackson.

Jacobsen says there is still time to make up for lost ground after a disappointing start to this year's rainfall season.

"But we still have about 40 percent of the perception season left in front of us. So there is still that opportunity for two, three or four more storms to roll in and that can really make a substantial dent in the hole that we made," said Jacobsen.
Report a correction or typo
Related topics:
weathercaliforniaweatherdrought
Copyright © 2021 KFSN-TV. All Rights Reserved.
WEATHER
Accuweather Forecast: Above average temperatures
Foggy Day School Schedules, Fog Tracker from ABC30
Authorities ID wrong-way driver killed in Madera County crash
Young girl walking on road hit and killed as mom fights with partner
TOP STORIES
Man shot multiple times at party in southwest Fresno
Cyber Monday 2021 deals shopping guide
Fauci says omicron variant will 'inevitably' arrive in US
Valley health officials bracing for arrival of new COVID-19 variant
Fresno police share tips for protecting your packages
Pedestrian hit and killed in Clovis
Is it ever too early to put up a Christmas tree?
Show More
Fresno Co. man accused of stabbing his mother, killing her boyfriend
Fresno State student killed in early morning crash on highway
Boy life-flighted after being shot in Tulare County, deputies say
1 killed, 1 hospitalized after stabbing in Auberry, deputies say
What is omicron? What to know about new COVID variant
More TOP STORIES News