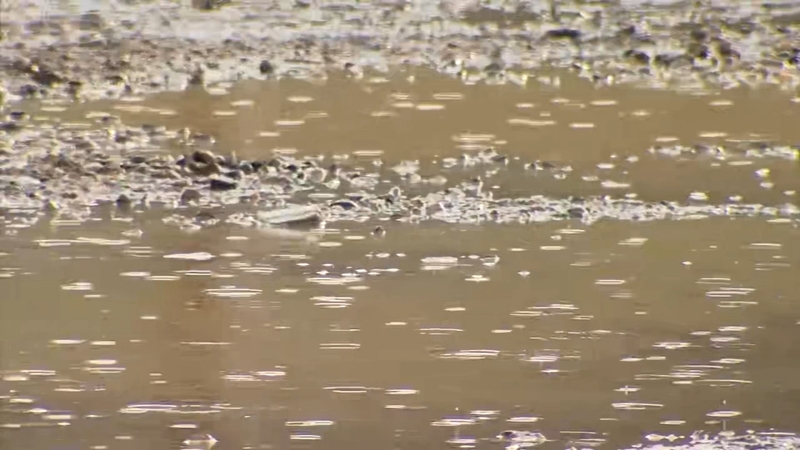 MERCED, Calif. (KFSN) -- Crews in the North Valley are preparing for more rain this week while cleaning up after the weekend storm.

Remnants of that weekend rain could still be seen throughout Merced County Monday morning, including the flooded shoulder of Santa Fe Avenue near Atwater's Castle Commerce Center. Water also had to be pumped away from Childs Avenue near Highway 59, which is prone to flooding. More rain began to fall by Monday afternoon, but officials say so far they've been able to prevent any major problems.

"We've been pretty fortunate. Our Public Works crew was able to go out ahead of the storm and clear our storm drains and debris so we didn't have any flooded roadways, and we don't at this point, but that could change," said Mike North, public information officer for Merced County.

Sand piles and bags are available in several places throughout Merced County. You can find a list of locations here: https://www.cityofmerced.org/home/showdocument?id=8494

In Madera, a section of Highway 99 below the Cleveland Avenue overpass flooded on Sunday, causing some traffic delays, but it was all clear 24 hours later.

"We've been told that it was a drain that was clogged under the overcrossing," said California Highway Patrol Officer Gregorio Rodriguez. "We have several low spots in that area, so it does have tendency to flood, especially when you get heavy amounts of rain."

Traffic was flowing smoothly through the city while conditions were still dry Monday, but the CHP is urging drivers to prepare for more localized flooding in the Valley and possible black ice in the foothills.