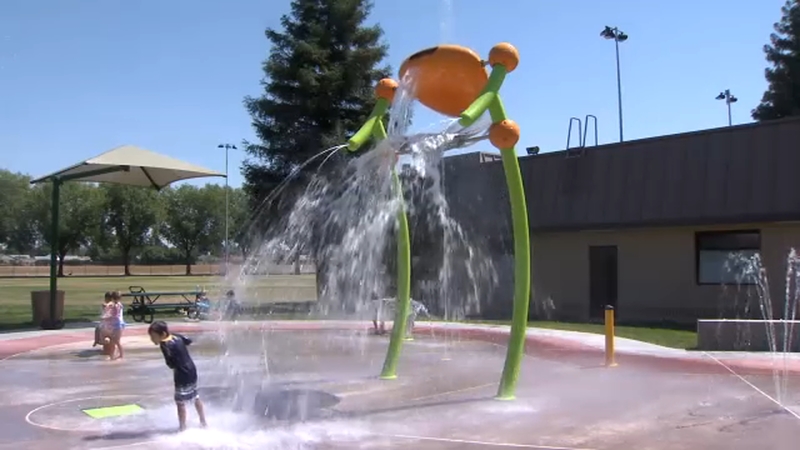 FRESNO, Calif. (KFSN) -- The water was back on and kids were enjoying the Splash Pad at Melody Park Wednesday.

The water at the park temporarily shut off Tuesday after an equipment issue.

April Talavera lives nearby Melody Park and said she and her kids were waiting for the newly built splash pad to open.

Since its grand opening Saturday, Talavera and her kids have enjoyed the water every day.

They were out at the park Tuesday when the water suddenly shut off.

"We weren't sure if it was just maybe recirculating or, you know, so we gave it a little bit of time and it just didn't go back on," said Talavera.

The City of Fresno says with the 105-degree temperatures Tuesday, the system overheated.

The Melody Park Splash Pad is back up and running today after a temporary issue yesterday. @ABC30 pic.twitter.com/RJofqwEg7N

"But what we've done is we've set up a fan that's going to keep it operational for now and as you can see, a lot of kids are back out and having a good time," said Sontaya Rose, the Director of Communications for the City of Fresno.

City officials said they're working with the system's manufacturer to find a permanent fix.

There are eight splash pads across the city. Of those, two are temporarily closed for repairs.

At Dickey Park in Downtown Fresno, officials said someone broke into the operating system and ripped out wires. Doing so ruined a motor, which is costing $120,000 to repair.

Dickey Park is closed temporarily as well. Officials say someone broke into the area where the system is stored and tore out wires. That fried the motor. They expect this one to reopen by the end of the month. @ABC30 pic.twitter.com/HbppufJy4B

At Vinland Park in Northeast Fresno, the system has cracked tanks that crews are working to repair.

The Melody Park Splash Pad is back up and running today after a temporary issue yesterday. @ABC30 pic.twitter.com/RJofqwEg7N

Officials said both splash pads should be back up and running before the end of the month.

"We're doing it as quickly as we can to get them up and running because we know, obviously, that the splash pads are a perfect opportunity and a popular place for the kids to gather for the summer," Rose said.

For parents like Talavera who was enjoying the splash pad with her little ones say they're ready to continue enjoying them, especially in the triple digit heat.

"We will be here every day." Talavera laughed.

Cooling centers were not open Wednesday. They are only open when the National Weather Service forecasts the temperatures to be 105 degrees or higher.

City pools are expected to open on June 14.

Each park has maintenance once a week which impacts hours: