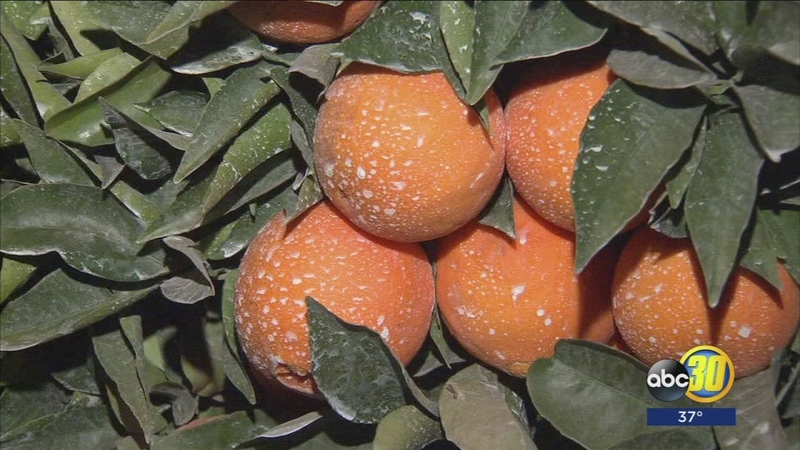 FRESNO, Calif. (KFSN) -- A freeze warning is in effect Thursday night until Friday morning. For us, it means a cold night, but for citrus farmers, it means much worse.

"It is very concerning when you start to look at durations of under 32 degrees somewhere around the eight or 10-hour mark," said Ryan Jacobsen CEO for the Fresno County Farm Bureau.

"I absolutely think, if you have potential significant exposure, you are going to deploy as many resources and do as much as you can to save the crop," said William Bourdeau Executive Vice President a Harris Farms

Farmers are taking action to protect their fruit. Jacobsen said they are doing this by two methods. The first is drip irrigation.

"Which releases that heat up into the orchard and buys you one or two to three degrees of difference," said Jacobsen.

The other is using fans.

"You see those very large fans, they are anywhere from 15 to 30 feet up on the air and what that is doing is just mixing the air up," said Jacobsen.

Bourdeau said the cold means some farmers might be up all night.

"They need to remain as vigilant as possible and I am sure they will use every bit of their experience," said Bourdeau.

Wednesday cold temperatures were expected, but mother nature was forgiving

"We had a little bit of fog, cloud cover, as well as that light breeze coming through," said Jacobsen. "Those three things really bounced the temperature up probably three or four degrees higher than expected."