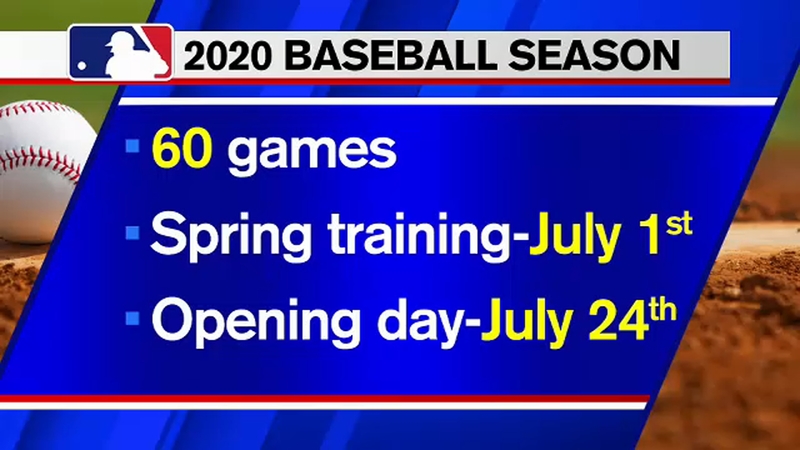 NEW YORK -- Major League Baseball issued a 60-game schedule Tuesday night that will start July 23 or 24 in empty ballparks as the sport tries to push ahead amid the coronavirus following months of acrimony.

A dramatically altered season with games full of new rules was the final result of failed financial negotiations. But for fans eager to see any baseball this year, at least now they can look forward to opening day.

The announcement by MLB came while more players continue to test positive for the virus - at least seven on the Philadelphia Phillies alone. And a stark realization remained, that if health situations deteriorated, all games could still be wiped out.

All remaining issues have been resolved and Players are reporting to training camps.

Players are expected to report to training camp on July 1 and they will play 60 games with the regular season likely starting July 23 or 24 at home ball parks.

"Major League Baseball is thrilled to announce that the 2020 season is on the horizon," said Commissioner of Baseball Robert D. Manfred, Jr. "We have provided the Players Association with a schedule to play 60 games and are excited to provide our great fans with Baseball again soon."

It remains to be seen which players will report back to work - high-risk individuals are allowed to opt out and still receive salary and service time, but others who sit out get neither money nor the service credit needed for eligibility for free agency and salary arbitration.

The proposed schedule will largely feature divisional play, with the remaining portion of each Club's games against their opposite league's corresponding geographical division (i.e., East vs. East, Central vs. Central and West vs. West), in order to mitigate travel.

The MLB is playing 37% of its typical 162-game season, which is the greatest season reduction in the history of any of the four pro major sports.

Health and safety measures remain the paramount concern. The MLB is working with a variety of public health experts, infectious disease specialists and technology providers on a comprehensive approach to facilitate a safe return.

Players are being given staggered reporting times over several days for intake screening. The time will be used for coronavirus testing ahead of the resumption of workouts, which were stopped March 12 due to the pandemic.

MLB originally hoped to be the first U.S. major league to return, with an 82-game schedule starting around the Fourth of July, but public sniping broke out between management and players who distrust teams' claims of economic losses following years of franchise appreciation. MLB claimed that without gate-related revenue it would lose $640,000 for each additional regular-season game, a figure the union disputed.