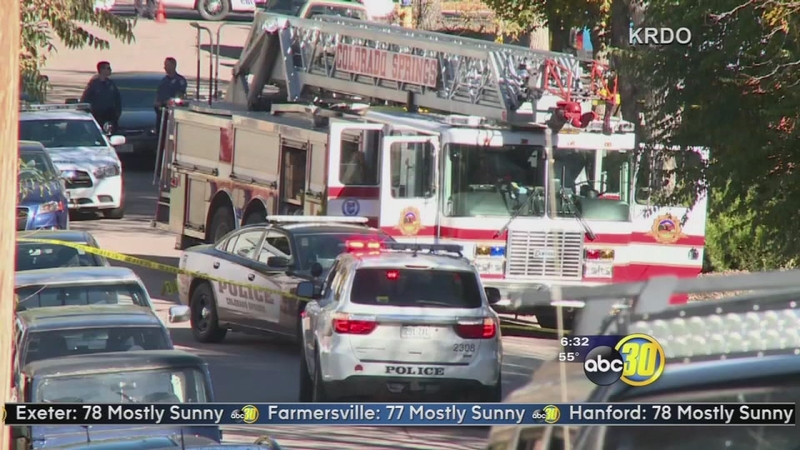 COLORADO SPRINGS, Colo. -- Witnesses on Sunday described a terrifying scene on the streets of Colorado Springs, where a gunman armed with a rifle marched down a city street and shot and killed three people before being fatally shot in a gunbattle with police.

Authorities have released few details about Saturday morning's shooting in broad daylight. The suspect and victims have not been identified, and police are looking for a motive.

A neighbor, Teresa Willingham, said she and her 7-year-old son heard three loud gunshots and saw a bicyclist lying face down in the street, his legs mangled and still intertwined in his bike.

A neighbor, Naomi Bettis, who lives across the street, said she saw a man in a green jacket with a rifle, walking down the street. She saw him go into a house, and come out with a gun. She said the man headed down the block, and a bicyclist came up.

Bettis said the bicyclist begged for his life, but the gunman started shooting.

Bettis said the bicyclist collapsed outside a house. She later placed a bouquet of flowers, a candle and a note where the bicyclist was slain, saying "My thoughts are with you. Praying for the family. I'm sorry for your loss."

Matthew Abshire, who lives nearby, told The Associated Press that he heard gunshots, looked out his window and saw a man firing a rifle. He waited for the gunfire to subside before he came outside and started chasing after the gunman, who had a rifle in his right hand and a revolver in his left. Abshire stayed about 30 yards behind him until he said the gunman turned and aimed the gun in his direction, prompting him to dive onto a porch to hide.

"He walked calmly and collectedly. His demeanor was like he was having a stroll in the park," Abshire said.

Abshire continued walking behind the man, who he said abruptly fired at two women on the porch of another house which is a home for women in recovery. A woman sitting on a bench was shot as well as another one who was standing next to her, Abshire said.

"It looked totally random," he said.

He rushed to help them, using his shirt as a tourniquet. He said one of the women had no pulse.

When help arrived Abshire took off after the gunman again but was stopped by police, but he could still see the gunman fire at a patrol car, breaking its window before officers shot him outside a Wendy's.

Police say they spotted the gunman several blocks away, where a shootout erupted. Photos show a window in the back of a police car that had been shattered by gunfire. Police on Sunday asked residents to help them look for damage to homes and property that might provide more evidence.

Alisha Jaynes told KKTV-TV 11 News she was at an ATM when she saw a man with a gun walking calmly down the street.